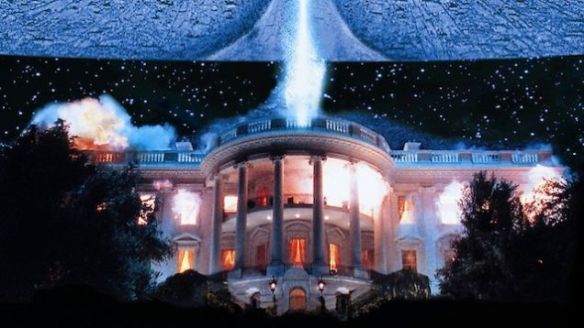 A few weeks ago, we saw the trailer for Independence Day: Resurgence, a 21st century sequel and the latest attempt to cash in on the nostalgia of a millennial demographic which apparently has some disposable income left to grab.

It’s worth going back to the original—a soaring Roland Emmerich thriller about how no force in the universe could take down the United States: not when the president, a famous rapper, and a scientist all get together in a fighter jet to kick alien ass.

It’s the polar opposite of The Matrix. Rather than admitting even the slightest unease below the surface of American life, it barrels forward as a jingoistic romp, giving us America as a crotch-grabbing, trash-talking, hyperpower without a care in the world.

END_OF_DOCUMENT_TOKEN_TO_BE_REPLACED

I’ve been avoiding watching this trailer. I know already that I’m going to see this movie, so I haven’t sought it out; I wanted to put off having to make a judgement call as long as I could. Well, it finally put itself in front of my eyeballs on Sunday when I went to see Deadpool, and I’m… tentatively excited?

You see, Independence Day is unironically one of my favorite movies.