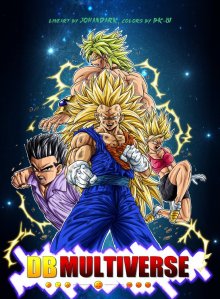 This past week I discovered a new level of procrastination that I had never felt before. Yesterday was my last day of class—after ten years of college—and at eleven the night beforehand, I still had two projects to finish, including my final. Naturally, instead of working my ass off, like I should have, I found a fan comic. I then read this comic—all 873 pages—in one go. I found myself so enraptured by the story and my lack of willpower to do anything else that it wasn’t until ten in the morning the next day that I realized “fuck! I have homework!”

Everything worked out for the best, though. I got an extension until Monday.

But seriously, after being a full-time student with two jobs and an internship, Dragon Ball Multiverse was exactly what I needed to help me get away for a few hours. It might be a fan comic—which is never as good as the actual thing—but if I hadn’t known that before going into the story, I would have thought otherwise. Dragon Ball Multiverse is thought out, true to the characters and to the original art style, and it keeps up with the original theme of the original narrative. That is, it has lots of fighting, explosions, and an abundance of Super Saiyans.

Sadly, though, Vegeta never screams this.

Yeah, I was hooked.