Sakamichi no Apollon/Kids on the Slope

First of all, this is one of those anime that are equally referred to by their English and Japanese names, so I’m not sure what to call it. I’ll refer to it as SnA the rest of this post. SnA is not the kind of fare I usually seek out—emotional, slice-of-life stuff—but I was unfairly roped in by the one-two punch combination of Shinichiro Watanabe (Cowboy Bebop, Samurai Champloo, etc.) as director and Yoko Kanno (Cowboy Bebop, Wolf’s Rain, Ghost in the Shell, Darker than Black) as composer.

Basically, this show is about three kids who are in love with jazz music and each other, living in Kyushu (the southernmost part of Japan) in the 1960s. The animation has a very different look and feel to it than most shows I’ve watched, the selection of jazz music was great even to me as a total jazz noob, and it definitely felt like it could have been a real-life story to me, which, I suppose, is high praise for a slice-of-life story. It’s also only twelve episodes, so it’s not a huge time commitment.

There were a few things I didn’t like about SnA—first of all, and this is not just my inner fujoshi speaking, the two boys and the two girls had far better chemistry with their same-sex friend than they did with their designated love interest. People really strongly defend Sentarou and Kaoru’s relationship as being platonic, and far be it from me to put a box on what straight male friendship in the 1960s looks like, but I don’t think that a guy who wasn’t just a little bit interested in his guy best friend would describe him as ‘so handsome that sometimes it takes my breath away.’ I honestly thought they might end up together at the end of the series. Also, it had a bit of a slow pace to it, but that’s probably just my action-loving brain being confused by a more thoughtful plot without lasers or robots or anything. I recommend it. 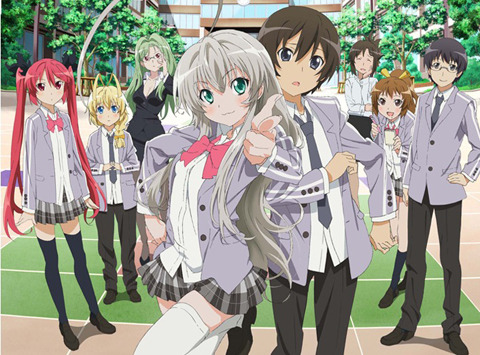 Oh, Nyarko-san. I had such high hopes for you. The premise of this show was what pulled me in: Most of the cast is Lovecraftian gods/eldritch horrors/etc, but in the bodies of mostly adorable high school girls (and one boy). Nyarko is actually a Nyarlathotep, Hasuta is actually a god of winds, Kuko is actually Cthuga, a fire deity, etc. I was hoping that this would be fun, intellectual, and different. Instead it was just a Lovecraftian twist on a harem anime. Seriously, boring male lead with inexplicable number of supernatural love interests vying for his attention in ways that are probably definitely inappropriate for middle-schoolers (or ageless gods in middleschooler bodies), various homosexual crushes dismissed as disgusting and perverted, lots of non-consensual kissing. Don’t waste your time unless you really like harem anime.

I was actually quite surprised by Sengoku Collection. I have this weird habit where I hope that one day harem anime will get less annoying and rapey and so I continue to watch it for one reason or another and continually get disappointed. (Love Hina someone recommended to me, I watched Shuffle for the dads, etc.) The description of and first episode of Sengoku Collection had me believing for sure this would be another example of this. (The gimmick in this show being, of course, Sengoku (Warring States) era warriors are falling through into modern day, except they’re from an alternate universe where all of them are beautiful young women rather than gruff old men.)

Like I said, I figured this would be another crappy harem anime, but actually each episode has taken the time to focus on a different Warring States figure and their individual conflicts upon arriving in modern times. The only real connecting thread is Oda Nobunaga, who wants to get back to the Sengoku period and is collecting magic power from the other women to do so. She usually shows up at the end of an episode and talks, bargains, or fights the other girl and then disappears again. This anime is twice the length of SnA and Nyarko-san, so it’s not over yet, but I’m actually enjoying tuning in every week as of right now. (Although I think they may be running out of Warring States-era figures, becaues the last episode I watched was about Kondou, Hijikata, and Okita of the Shinsengumi, who didn’t live until 300 years after the Sengoku era.) Either way, though, I do recommend this show.