Recently, in honor of Twilight’s 10th anniversary, Stephenie Meyer released a genderbent version of the book called Life and Death: Twilight Reimagined, which I have not read and will only read if I find myself really desperate for new material to write about. But considering that Star Ocean 5 is almost out, I just watched Gotham Season 2, and Game of Thrones’s latest season is about to finish up, that’s not going to be a problem for me anytime soon.

Since I haven’t read Life and Death, I only know about it through what other people have told me—and it’s been nothing good. Part of the reason Stephenie Meyer wrote this book was to address the complaints people had about sexism. Almost immediately, I knew she wouldn’t be able to succeed in her endeavor and that Life and Death would just be another rehashing of the same sexist garbage. This is because, from reading Twilight, I’m going to guess that Stephenie Meyer clearly has no idea why Bella’s role in the story is sexist, especially because the sexism could have easily been fixed without changing any genders at all.

END_OF_DOCUMENT_TOKEN_TO_BE_REPLACED

Despite working in a bookstore, the release of a genderswapped Twilight rewrite titled Life and Death accompanying the 10th anniversary edition of the original story came as a surprise to me as well. (We weren’t even allowed to open the boxes it came in till last Tuesday morning, in fact.) While Stephenie Meyer claims she wrote it as a challenge to those who critiqued the stereotypical gender roles in Twilight, a quick perusal of the reimagining seems to show that they’ve just been reversed.

When you see the two versions of the same story compared to each other, the changes suggest that Meyer should’ve ignored complaints about Bella being a stereotype and maintained the value of what was undeniably a successful franchise. Instead, she ended up adding slight variations that feed into traditional gender stereotypes: Females receive more unnecessary physical description than their male counterparts did in Twilight and Bella almost cries where Beau doesn’t. (via Entertainment Weekly)

Thankfully, fandom is always there, and a group of dedicated fans have stepped in to create a reimagining that’s actually more progressive than either of these books. Twife or Death, originally titled the Twilight Lesbians Project, has sprung up in the last week on Tumblr, spearheaded by Tumblr user tallulademetriou.

END_OF_DOCUMENT_TOKEN_TO_BE_REPLACED 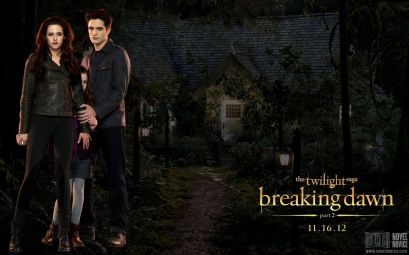 It’s been a while since Breaking Dawn came out, and by this point in time, I think most of you are probably already well aware of what happened in it. However, for the whole two or three of you who don’t know—spoilers!—Edward and Bella have a child. I briefly talked about this a few years ago, and looking back, I disagree with my assessment of Bella’s character in regards to her pregnancy.

I thought Bella was selfish for wanting to keep the child—mostly because Bella always gets whatever Bella wants—but I don’t think that’s true. This pregnancy is something that will kill her, and her desire to have the child at the expense of her own life is a selfless act that I, as a pro-lifer, cannot even be sure I would have gone through with.

However, my disdain over the whole situation remains the same. Twilight should never have been able to bring up the subject of abortion, mostly because Bella’s pregnancy shouldn’t ever have happened.

END_OF_DOCUMENT_TOKEN_TO_BE_REPLACED

Actually, all kidding aside, I found myself kind of enjoying The Host when I first read it. Or rather, the first fifty-some pages, because that’s all I made it through before getting sidetracked by a new Japanese grammar book. I would like to tell you that I found the writing of The Host so bad that the grammar book was more compelling, but that would be lying. Certainly it wasn’t as interesting as learning how to conjugate, at least not to me, but I personally thought that The Host was a step up from the Twilight series. Granted, after Twilight, it’s hard to step down, and I’m glad Stephenie didn’t.

By all means, I wouldn’t say that I found The Host a good book. Here, let me sum it up: Mary Sue and Parasite Sue fight over the same body… and man, I guess. Pretty much, the world has been invaded by scintillating centipedes that act like the Goa’ulds from Stargate and take over humanity. But unlike Goa’ulds, our sparkly insects only want what’s best for society and world peace blossoms! Yay!

Stephenie Meyer Melanie Stryder, our main Mary Sue, is one of the few humans left still fighting against the peaceful invaders. Unfortunately, she gets captured, and that introduces our other Mary Sue, who has a wide variety of creatures she can take over on her little alien résumé. Once she was a flower!

On page five we learn all about all the lives she peacefully stole from other people. This is also about when I started questioning whether or not Stephenie’s editors paid any attention to this book either. Our parasite was once a See Weed. Not a Seaweed, a See Weed.

I don’t know if that was a grammatical mistake that got corrected in later copies or if the creature is actually called a See Weed. From what I understand, we never really learn about all the other planets, so for all I know, in Whatever World, weeds are normally invisible, and See Weed got its name for being normal. That’s just my guess.

Yeah, as much as I wish otherwise, I probably won’t be skipping this one.

Oh, well, weren’t the closeups of all the eyes so thrilling?! It kind of reminds me of this trailer, where nothing also happened!

I realize that this trailer has probably been out for a while now, but I don’t really keep up with the hype anymore, or at all, for that matter. Unfortunately, this may not be the only time we’re ever going to see a Breaking Dawn trailer, because it’s quite possible that like Harry Potter, this may be a two-parter. Though, I’m not really sure what Breaking Dawn actually has to offer in order to make two movies.