With the recent news  that Joss Whedon is in the works to do a (potentially amazing, if arguably problematic) Batgirl movie, I’ve been thinking about Barbara Gordon a lot. I mean, more than usual. BG’s always been a personal favorite and perhaps the first example I remember from my childhood of not only a real “strong female character” but a superhero I actually connected with. Babs has been a hero to many and while she has been used in incredibly problematic ways over the years, she remains one of the most prominent female superheroes to the average geek. 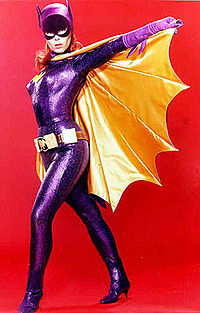 This shade of purple was forever associated with Batgirl in my brain. (image via Batman Wiki)

As different artists have taken a crack at Batgirl over the years, she has gone through a few phases, as have most of the other major players in the Batman canon. Many of those different versions of BG have been used in exploitative ways. Despite this, many have made her a feminist icon and often a source of inspiration to fans of all genders. In looking back at some of these incarnations, I also hope to highlight a few things that will be crucial to the Batgirl film not ending up horrible.

TW: Discussion of themes related to sexual violence and ableism.

END_OF_DOCUMENT_TOKEN_TO_BE_REPLACED

I’m mostly between fandoms right now; my summer shows are over, my fall shows haven’t started, and I’m trying very hard not to spend my entire life reading post-finale Hannibal fanfiction. In the interests of digging into something new, I clicked on a bookmark I’ve had for a while—a link to the first page of a webcomic called Strong Female Protagonist. I’m not sure who first recced it to me—if I had to guess, my money would be on former LGG&F writer SquidInkSamurai—but it’s sat in my favorites for… probably years without my ever having read a panel. When I saw that I was up to write a Web Crush this week, though, I knew its time had come. I clicked the bookmark. The SFP fandom gained a member.

Trigger warning for mention of rape after the jump.