While some people, like myself, spend summer dying from the heat and humidity, other people go off and have those oft-fabled summer romances. In the case of this week’s Fanfiction Fridays, the emphasis is on the “fabled”. Todays’ fanfiction is a collection of things I enjoy immensely: well-done AUs, Tales of Vesperia, and a dash of fairy tales. If any of those things catch your interest, I implore you to read on beyond the cut.

END_OF_DOCUMENT_TOKEN_TO_BE_REPLACED 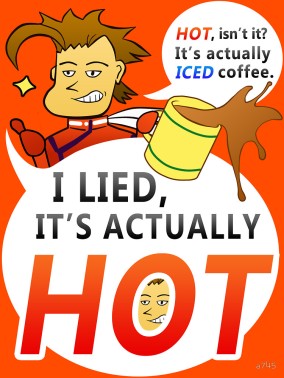 Tales of Symphonia is a good game that everyone should play.
(via a745 @ DeviantArt)

At the beginning of this month, Tales of Symphonia was re-released on the PC via Steam. While Symphonia might not be my favorite one of the series, it’ll always be the closest to my heart since it’s the game that got me into Tales in the first place. There was just something so satisfying about pouring tens of hundreds of hours into the story about Colette, the Chosen of Mana’s journey to bring mana back to her declining land, and all the twists and turns that come along with that. (And then realizing you have to do yet another playthrough because you wanted to have the Flanoir date with Sheena and didn’t realize that Zelos gave you a special item if you did it with him, so you couldn’t finish filling out your item collection book. Ugh!)

While its PC port is… reportedly janky as hell, I’m thrilled that fans have another chance to play through the game, and that others who weren’t able to get it for the Gamecube or PS3 now have another medium to experience it on. Honestly, there was a lot to love about Symphonia, but one of my favorite parts was the character Raine. I can’t say that I really related to her on a big level, but I wanted to be her. She was strong in her convictions, yet willing to hear other sides to conflicts; she cared deeply for her brother and her students even if she showed this best by giving more homework; and she had a nerdy hobby that she was unapologetic about, even if others were put off by it. While the game didn’t have much time to go into it, one thing that always intrigued me was her relationship with her brother Genis and how they ended up in the small village of Iselia. If the anime went into it more in detail, I’m uncertain, but today’s fic gives a closer look at a possible chain of events that led both of them to where players find them at the beginning of the game.

Spoilers for Symphonia beneath the cut.

END_OF_DOCUMENT_TOKEN_TO_BE_REPLACED

A little more than a month ago, I brought to light my dislike for the white mage trope in RPGs and my wishes that such lazy tropes would be re-worked into more dynamic characters in the future. I still very much think this, but in writing said article I made myself consider the white mages that I had already come across in my gaming life. Unsurprisingly, the character that I automatically think of when considering this trope is not, in fact, Yuna from FFX, but Colette from Tales of Symphonia.

This is an obvious choice in my case because, while my brother certainly is a fan of the Final Fantasy series, I never really got into it until X-2 and honestly, I’m still not really into the series beyond that specific game. Instead, my first true foray into the JRPG scene, and probably the RPG scene as a whole, was Tales of Symphonia. Its story focuses on a religion that has been perverted to the point of sacrificing someone in waking up the goddess that will bring mana back to the world, and it just so happens to be Colette that has been chosen to—rather, has been bred to—become this sacrifice. However, most people aren’t aware that this ‘chosen’ will end up giving their life, and instead believe that they will become an angel. As such, it makes sense for Colette to carry the typical angelic-healer looks and personality: blonde hair, blue eyes, white clothes, and a sense of self-sacrifice that could make anyone around her feel ashamed.

Yet Colette isn’t the healer/white mage of the group. In fact, Colette gets no healing abilities and is actually more aggressive in her play style. The healer in Symphonia is Raine Sage, a somewhat bitter half-elf who has more fondness for ruins than for the people around her. I bring these two up not because Colette is exempt from the white mage trope due to her lack of healing skills (she’s still a “white mage” in terms of motivation), but because the game actively presents opportunities in which the audience can re-evaluate the inherent tropiness of having someone be a “white mage” in the first place.

END_OF_DOCUMENT_TOKEN_TO_BE_REPLACED

There’s nothing I love more than seeing how people interact with their canon of choice. Art, writing, cosplay: every piece of output from fandom I find incredible as well as inspiring—if anyone is touched by something so much that it drives them to create, well, there’s something beautiful about that. And while I have an appreciation for most of these things, I will admit that I have my biases. By some stroke of luck, I managed to find my main bias combined with one of my fandoms in this week’s web crush.

As evident by my post from a couple weeks ago and (less evidently) by the fact my brother and I have been marathoning the re-release of Tales of Symphonia, the Tales games and fandom are both things that I hold close to my heart. Beyond the excruciating satisfaction of one hundred percenting the games, one of my favorite aspects of these games is the cooking system. I got cheated out of it in Tales of Xillia—buying pre-made foods isn’t as fun no matter what bonuses you give them!—but there’s something really fun in the simplicity of buying ingredients and watching your party members get better at cooking as you go through the game.

Even finding recipes in their hidden locations scattered across the game’s world can be a journey in and of itself, adding more to an already expansive universe. Given such a mechanic, it was only a matter of time before someone decided to document their attempts at making these recipes in real life. I’ve already featured one site like this, but given my return to the fandom, I found it only appropriate to feature Tales of Cooking. END_OF_DOCUMENT_TOKEN_TO_BE_REPLACED