Over our summer break, I was reading a book whose protagonists traveled to alternate universes which, frankly, I didn’t like very much. But it did get me thinking about the idea of alternate universes in fiction. Not the scientific concept of alternate (parallel) universes—though that’s often the subject of many sci-fi stories—I’m talking about the alternate universes that result from one thing changing in a fictional story. What if Charles Xavier died before he could found the X-Men? What if Captain America was a Nazi? Undoubtedly, a lot of things would be bad. And unfortunately, this is the kind of alternate universe that we often see in today’s fictional media. However, the idea that one different thing could change everything is so broad that I don’t understand why this kind of grimdark change is the most common. Fanfiction also often deals in alternate universes which diverge from canon, but the changes of fanfiction, on the whole, all tend to be more positive and more emotionally satisfying. Though many mainstream movies and TV shows disdain this sort of happy story, an alternate universe which changes originally negative canon material into positive new story fodder can bring with it a wide range of different emotions than the usual grimdark reboot is capable of. 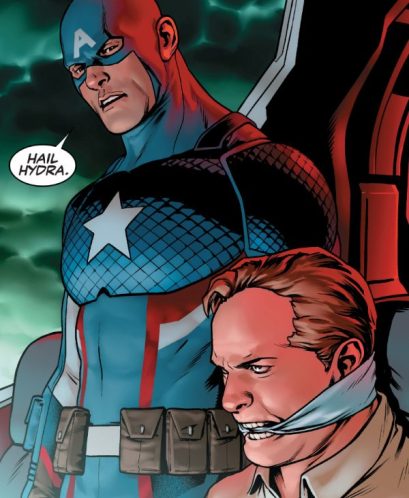 What if… not this. (via bleedingcool)

END_OF_DOCUMENT_TOKEN_TO_BE_REPLACED

“I presume that Jiraiya has the contract for toads?” Kurenai asked.

Naruto nodded, and they both jumped as Shino dropped his folder on the floor. Shino quickly bent over and began gathering up his papers, shoving them haphazardly into the folder. When he straightened up, Kurenai thought she noticed a slight tremor in his hands. “Are you all right?” she asked.

Shino nodded. Then he turned to Naruto. “That would be a very formidable technique. That being the case, I will no doubt be forced to forfeit the match if we meet in the finals.”

“Toads are incredibly voracious insectivores,” Shino explained, “capable of consuming a significant portion of their own body mass in a single night. If I attempted to use my kikai jutsu around them, I would stand to lose significant portions of my colonies in short order. Even if I were to defeat you, I would be effectively crippled in the process.”

“However, you should not let that be your sole decision criterion,” Shino concluded. “As this should remain between you and Kurenai-sensei, I will bid you both good evening.”

With that, Shino left, and Kurenai wondered if it was her imagination or he was walking a little faster than usual. She shook her head and turned back to Naruto. “If you’d like some more information, I’ll see what I can find at the library.”

Naruto shook his head. “No way am I signing that scroll now,” he declared.

Kurenai merely raised an eyebrow and awaited his explanation.

“The old pervert was showing off when he demonstrated the technique,” Naruto began. “Some of those toads are really big. I wouldn’t dare try using them when we’re on a mission — one of them might eat Shino, just to get all his bugs.”

Kurenai blinked. “I see,” she said. That was definitely a novel reason not to learn a new jutsu. She only hoped Naruto didn’t later regret his thoughtfulness.

After fifteen long years, Naruto has finally, finally come to an end. I used to be really into the series, but as author Masashi Kishimoto continued to drag the story on and on, I eventually lost interest. However, some of my friends did not lose interest, and gave me blow-by-blow updates of the important plot twists as they unfolded (and ignored my complaints about the Uchiha, of which there were many). Finally, the last few chapters rolled around, and, intrigued despite myself, I read them. Spoiler alert: they covered exactly none of what I wanted them to cover. Yes, all my ships came true, but none of them made any sense! What about character development? What about the advancement of ninja ideals and society? What about my favorite clan, the Hyuuga?

It was time to delve even further into nostalgia. Feeling bitter about everything, I went into my fanfic bookmarks and hunted out one of my old Naruto fandom favorites: Team 8.