Bits and pieces of news about Doctor Who Series 9 have been starting to emerge over the past few weeks, not least of which that Arya Stark herself, Maisie Williams, would be starring in an episode. While the show has certainly had its ups and downs in quality over the last few years, I’ve noticed a distressing trend, and one I can’t really even blame solely on Moffat (even if I’d like to).

Look at it this way: you’re watching Doctor Who. This season’s companion has a Black boyfriend, and the Doctor treats him disrespectfully and refuses to acknowledge his identity by constantly misidentifying him. Which Doctor am I talking about?

Trick question—it could be Mickey or Danny. This forces me to point out a very unsettling pattern in Doctor Who: the Doctor’s behavior toward the men of color in his companions’ lives is pretty dang racist.

END_OF_DOCUMENT_TOKEN_TO_BE_REPLACED

When I started my Classic Who review series, I did warn/promise that I wouldn’t be going in chronological order by any means. True to that, let’s talk about Paul McGann’s contribution to the Doctor Who canon: that TV movie from the nineties titled only Doctor Who.

END_OF_DOCUMENT_TOKEN_TO_BE_REPLACED

By now, I hope you’ve caught up with Series 7.2 of Doctor Who. The last episode of the season, called “The Name of the Doctor,” concluded with an amazing scene that needs to be seen to understand what I’m going to be talking about. Obviously, everything after the jump is spoiler-filled. So don’t read/watch unless you want any part of this brave new world we’re entering.

END_OF_DOCUMENT_TOKEN_TO_BE_REPLACED

In fiction, there are usually common concepts that drive a work. It’s the action that drives the main character towards the story’s resolution. Sometimes, the concept can be something as simple as a contest. Sometimes it’s as complicated as a war. 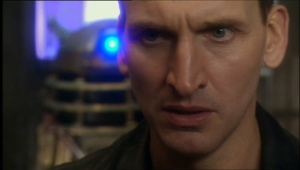 END_OF_DOCUMENT_TOKEN_TO_BE_REPLACED

Don’t get me wrong, fellow Whovians; I love the “The Impossible Planet/The Satan Pit” double episode. It’s got the shippy Ten/Rose stuff that I live and breathe; it’s got genuinely interesting sciencey-wiencey concepts, it’s got foreshadowing to die for, and it’s got an edge-of-your-seat, truly terrifying plot. I’d easily rank this among the scariest episodes of Doctor Who, maybe beaten only by “The Impossible Astronaut/Day of the Moon”. 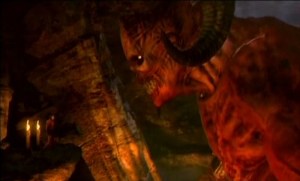 What about theologically, though? This episode presents a lot of interesting and potentially confusing ideas that I’d like to parse through. END_OF_DOCUMENT_TOKEN_TO_BE_REPLACED

END_OF_DOCUMENT_TOKEN_TO_BE_REPLACED

I don’t know if any of you guys write your own blogs, but have you ever had an idea for a post and while doing research on it, find everything you wanted to say already written by someone else?

Because that just happened to me with this post. And it also doesn’t help that it was written by someone who is a better writer than me.

So go read this editorial written by Stephen Kelly of The Guardian. Don’t read any more of this post until you do.

Read it? Good! Now, you don’t need to venture further than Whovian Confessions to know that people worship the Doctor. Maybe it’s because I am Catholic and firmly believe there is a God that I don’t have that desperate devotion to the Doctor like some other Whovians. But even then I think there’s something in the Doctor that God doesn’t necessarily have. The idea that the Doctor can come down and whisk you away adventures, that the Doctor can actually be a real and physical part of one’s life, is in some instances for certain people a lot better than someone who never seems to be around.

Another thing is God is not like the image on the right. The Doctor is. The Doctor is your friend; he wears 3D glasses, thinks bow-ties are cool, speaks baby and dinosaur, plays soccer, goes on crazy fun adventures, and more things that I can’t think of right now. Who wouldn’t want to be his friend (especially Eleven’s, since he has no dark side with any real bite)? Who wouldn’t want to get whisked away on an adventure with him, regardless of the dangers?

So while some of you prefer to believe in God, others will rather just stick with their friendly, neighborhood Doctor. And I don’t know that there’s necessarily anything wrong with that.

Last week Lady Geek Girl talked about the way fate and free will tend to be ‘in a relationship and it’s complicated’ in popular fiction.

This week I’m also going to talk about free will, but I’m going to take a different track—I’m going to look at the intersection of free will and personal responsibility.

What exactly do I mean? Well, people have free will. They can do whatever they want. But if it’s within their power to do the right thing, even if it will have unpleasant consequences, do they have a responsibility to do the right thing? Or is it morally acceptable to say, “no, I’m washing my hands of this”? I think that there has to be a balance. In fiction, choosing of one’s own free will has a particular weight and importance.

Before this becomes a Philosophy 101 debate, let me give you some examples to show you what I mean.

END_OF_DOCUMENT_TOKEN_TO_BE_REPLACED

I’m putting the jump right here because I don’t want to spoil anything. Beware of many feels behind.

END_OF_DOCUMENT_TOKEN_TO_BE_REPLACED

What? Wait, what? The Pond Lifes (Lives?) so far have been cute and funny. This one is bleak, and sad, and now I want to know What Is Wrong in the Pond household. I guess I’ll find out tomorrow.