Spoilers for Transistor below.

I’ll be honest with you all: I don’t really know what a transistor is used for in real life. Wikipedia is telling me that it’s a tool used to amplify and/or switch electronic signals, and considering that Transistor’s battle system is all about switching around various powers to get the combination that works the best for you, the player, the name makes sense. (Although I would argue that my initial thought of “USB sword” is also very fitting, despite the lack of catchiness.) While, yes, this system creates what is essentially the game’s magic, I found it interesting that the act of “downloading” a person’s consciousness into a sword wasn’t really considered strange. When the player is first instructed to provide sanctuary to a townsperson that has already succumbed to the Process by absorbing them into the sword, it’s just a matter-of-fact kind of deal. Sure. Why not do that–totally normal. True enough that magic doesn’t always have to be a scary, alien concept in a fictional universe, but since the Transistor (sword) is essentially the only one of its kind, the idea that everyone is just okay with this struck me as kind of bizarre. Yet, when the world around you is dying, affording this much suspension of disbelief isn’t too hard.

Looking at the game now after the fact, I think I was distracted from the true magic in the game. Not that the power of the Transistor should be entirely discounted, and there is definitely something to be said for transformation, but the line spoken near the end by Royce Bracket, member of the Camerata, hints towards the true magic taking place here. He states that the Transistor is a brush, while the Process is the paint by which the city is created and re-created. Compared to the blunt theme of transformation throughout, what I find is the true magical force in this game is that of rebirth: a power that Red ends up embracing, but only on her own terms. END_OF_DOCUMENT_TOKEN_TO_BE_REPLACED

Listen. Okay, I know I fucked up.

You can ask me right now, “Rin, Transistor came out in 2014 and you haven’t played it until this very day?” To which I will reply, “no, you silly. I played this on Tuesday. Get with the times, geez,” followed by a very mumbled and incoherent “yeah, I guess you’re not wrong, though.” Everything about Transistor outside of the gameplay feels like it was catered to my tastes: female protagonist, stunning art deco theming, romance. I don’t even have a defense for this. I am honestly so mad at myself for not playing this earlier—Steam backlog be damned! So, if you want the short of it: play this game. Even if you’re kind of ehh about video games, play this game. If you want the long of it, follow me below the cut (with all those juicy spoilers) and see what makes this game so goddamned good. 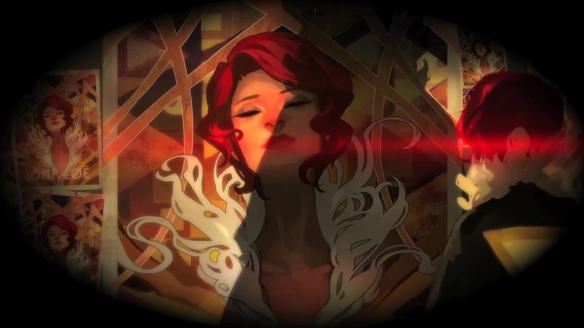 Trigger warning for a mention of suicide below the cut.

END_OF_DOCUMENT_TOKEN_TO_BE_REPLACED

Assassin’s Creed, Saints Row, Donkey Kong: Tropical Freeze: these are just a few of the games on my to-play list, and with E3 coming up next week, that list isn’t going to get shorter any time soon. Despite my lack of time and funds, I’ve been seeing games everywhere that I’d love to play. However, out of fear of turning into one of those Steam users who have hundreds of games that never get played—who am I kidding? I’m already there—I’ve been severely stunting my purchases. This game may break my self-imposed embargo.