Since the Divergent movie came out this weekend (Luce reviewed the trailer here), I figured now would be a good time to discuss the trilogy’s religious implications. And no, I’m not going to go on about how the main character Tris is a Christ figure, because once again, that’s too obvious. But it’s well-known that Divergent trilogy author Veronica Roth is a Christian, and her beliefs come through in her books more clearly than they do for a lot of other authors. Specifically, while reading the second book Insurgent, I found a lot of references that sounded Protestant to me. Let’s take a look at how the whole trilogy holds up against a specific Protestant framework, the Five Points of Calvinism. Spoilers for the entire Divergent trilogy after the jump. 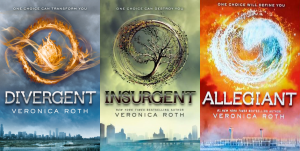 END_OF_DOCUMENT_TOKEN_TO_BE_REPLACED

Look, they’re making a movie of another wildly popular YA series! Yes, following the path of successes like The Hunger Games and not-really-successes like The Mortal Instruments, Veronica Roth’s Divergent series is also hitting the big screen.

Slight spoilers for Divergent after the jump.