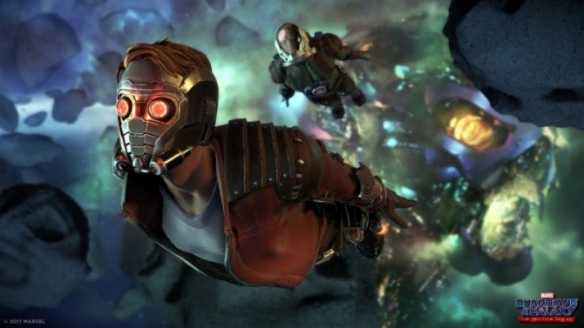 *80s pop music playing in the distance* (via Den of Geek)

I don’t have to tell anyone reading this site that we’re living in a world saturated by superhero media. Between the hundreds of movies, TV shows, Netflix originals, video games, and of course comics, how does one stand out from the crowd? Especially when you’re one of many adapting/rebooting something as ridiculously overdone as Batman? Well, you do what Telltale Games does: you acknowledge that media saturation and the fact that your title character is a pop culture icon, and you decide to use that to do something different. You accept that your players will be bringing some knowledge of the superhero franchise—be it Batman or, more recently, Guardians of the Galaxy—you’re adapting to the table. And you use that knowledge as a foundation to play on audience expectations and take the opportunity to toy, fanfiction-style, with some “what if?” scenarios to create innovative and intriguing new takes on the familiar stories. And you do it all while exploring and giving agency to sidelined women characters, too!

I’ve been hearing whispers about a new Life is Strange project for a while, though I couldn’t figure out how the developers would do it. A sequel was out of the question since the ending of the game is set up deliberately to take the story in two completely different directions, so making a direct Life is Strange 2 would surely be impossible unless they wanted to make two completely different games. Lo and behold, it turns out the new Life is Strange game is a prequel, focusing not on Max and her time powers but on Chloe a few years before the events of the original story. This is, all things considered, the sensible choice, though I’m intrigued and cautiously optimistic about how it will turn out.

END_OF_DOCUMENT_TOKEN_TO_BE_REPLACED

You first meet the protagonist of Night in the Woods, twenty-year-old Mae Borowski, when she arrives at her hometown’s bus station after dropping out of college. She remarks that the bus station is probably the newest and fanciest building in the town of Possum Springs, all the better to give people coming through the best first impression possible. However, we soon see that the bus station, with its shiny floors and glorious sunny mural advertising prosperous life in Possum Springs, is just a façade, and as soon as Mae arrives in the town proper, we see that it’s crumbling inside and out.

As Mae explores her childhood home, the game’s use of color, landscape design, character dialogue and atmospheric music all help to build a rich, vivid, sensory picture of this once-great but slowly dying coal town, injecting so much personality that the setting almost feels like a character. Which not only makes it a fantastic backdrop for the unfolding story, but a neat metaphor for what’s going on with Mae herself. And… also a little bit of something deeper and darker.

Spoilers for the end of Night in the Woods ahead!

END_OF_DOCUMENT_TOKEN_TO_BE_REPLACED

Screencap of Cute Demon Crashers’s main menu (once you’ve completed all the routes… which I did, because I love)

In our team, we felt there was a need of consent and safe spaces in 18+ VNs for women, and NaNoRenO 2015 was the perfect excuse to make a game to fit those needs!

Consent and comfort is a massive, integral part of Cute Demon Crashers. College student Claire (who the player can rename) accidentally summons three incubi and one succubus who sense that she’s lonely, and over the course of the game she can bond with them and learn about them, and, if she wants to, pick one to have sex with that night. Whichever adorable sexy demon she picks, the ensuing sex scene is sweet, gentle, sometimes funny, and each demon is lovely in their own unique way. Because consent is an integral part of the development team’s mission, it’s an integral part of the gameplay: plenty of options pop up throughout the scene, with Claire’s lovers asking her if she wants to do this, or that, or stop. And indeed, a big stop button is available in the corner of the screen at all times. If you hit the button or want to back down, the demons never make Claire feel bad about it, and they do everything they can to make sure she’s physically and emotionally comfortable throughout the whole process.

There are no bad ends in this visual novel. It’s entirely about having a good time and exploring sexuality in a fun, safe, and comfortable way, with the magical love demon aspect managing to be adorable rather than skeevy like it could be. The whole game was a delightful and fun experience, which is why I’m super excited that Sugarscript has announced that they’re working on a “Side B” sequel/spinoff for the game.

END_OF_DOCUMENT_TOKEN_TO_BE_REPLACED

This is the trailer that got me to jump right into the Assassin’s Creed fandom, and I am so excited to go see it. That said, as much as I want this movie to be amazing, a really big part of me worries that it won’t be. The movie is supposed to premiere in December, right around the time Rogue One comes out—with that kind of competition, I can’t say I have too much hope the movie will do well. Mostly, however, while the Assassin’s Creed movie looks awesome, game-to-movie adaptations are rarely good, and I’m concerned the same will be true this time around as well.

END_OF_DOCUMENT_TOKEN_TO_BE_REPLACED

Even though I’m not an avid gamer, my brother always keeps me up-to-date with any indie games he finds interesting. The newest game he’s told me about is called Undertale. Unfortunately it’s still in development at the moment, but you can play the demo to get an idea of what the game will be like. There are numerous reasons I’m excited for this game, one of them being the lack of detail to the main protagonist. There’s a unique gameplay that allows you to fight or befriend characters, and the style of the game is very reminiscent of other games like Earthbound. Everything about this game is precious; I’ve even re-watched the trailer video to death at this point:

Spoilers ahead! Seriously though, check out the demo, it’s free!

END_OF_DOCUMENT_TOKEN_TO_BE_REPLACED 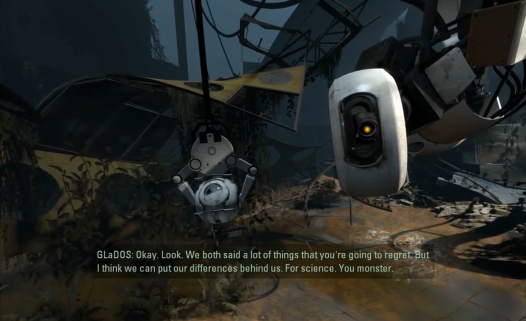 I love the Portal series, especially the sequel. The gameplay is solid, the narrative is pretty funny, and it has a great atmospheric soundtrack. But I always thought the series had a little more to it. I found the games’ takes on gender to be interesting and subversive.

Spoilers after the jump. END_OF_DOCUMENT_TOKEN_TO_BE_REPLACED

So I struggled for a long time with what to write about for this post. To be perfectly honest, most of my morning was spent letting my brain be melted by the stealth-bomb gesamtkunstwerk that is Beyoncé’s newest album, which if you haven’t heard, appeared at midnight on Friday the 13th, without being announced or leaked at all. Spooky, but awesome.

Speaking of things that are spooky, yet awesome: The Last of Us. If you don’t know, The Last of Us is a highly rated zombie-survival third-person action/adventure which tells the story of a jaded mid-aged smuggler and a young girl making their way across a United States awash in fungus-zombies and bandits. It is also a game that I am completely obsessed with and have talked about in no fewer than three other posts. I had said something about not doing any more posts about The Last of Us, but I am completely untrustworthy. 2.5 months have passed since I last wrote about it, and so much has happened. END_OF_DOCUMENT_TOKEN_TO_BE_REPLACED 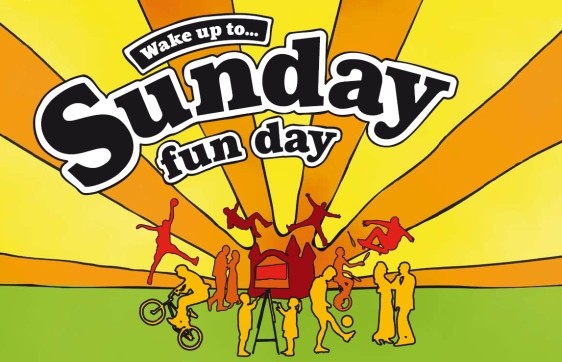 Gentle readers, I was raised Catholic, by a mother who believed that you could pray all you want, but if you weren’t going out and actually doing good work, then your faith was half-hearted, and that half was the easy half. Now, that’s just an opinion, and it may not be shared by all reading this. But since Sundays were the day we went to church, they were the days also devoted to charity and volunteerism. I wasn’t always psyched for it, and for much of my childhood I wished that I could play video games instead of volunteering. As it turns out, you can do both! So today I’d like to tell you about some good deeds being done at the intersection of gaming and good intentions.

END_OF_DOCUMENT_TOKEN_TO_BE_REPLACED

About one thousand years ago, in 2007, a friend showed me a trailer for a video game called Heavenly Sword. At this time, the PS3 was less than a year old and while I had one, I mostly used it for playing a game called LocoRoco, or a PS2 game called Drakengard, for which I still possessed an inexplicable affection four years after its release. Below, the trailer for the first PS3 title I was really looking forward to:

If you were a Playstation gamer back in ’07, you probably saw some version of it. I was so excited for the PS3 to start building a library of quality titles. Uncharted: Drake’s Fortune (which I planned to play, but didn’t get around to for two years) was to be released about two months after Heavenly Sword. I filled most of that gap by playing Everyday Shooter (which, go play if you own a PS3 and haven’t already) instead of doing my homework. 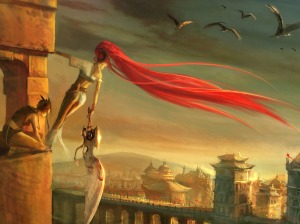 Heavenly Sword tells the story of a warrior woman named Nariko, born in the year of a prophesied male hero who wields the Heavenly Sword and becomes a savior. Her clan takes her gender as a sign of impending calamity. She fights the evil King Bohan to prevent the destruction of her clan, despite the price for wielding so powerful a weapon: her life. The game was rather short, but had an impressive attention to detail as well as a combat system so versatile and engaging that the game was dubbed “Goddess of War,” in comparison to the popular God of War titles.

Looking back, however, the game shines most brightly not in its combat system, but in its art direction, storytelling, and character design. The seventh generation of gaming consoles offered developers the potential to more fully realize facial details and emotions. Much like the acting in a play, expression and physicality are important in telling a convincing story. For a long time, gamers didn’t have access to that kind of detail and so, lived without it. Heavenly Sword was part of a generation of games that would change that. The devs do a better job of explaining than I do, so please check that out here.

So the reveal that I’ve been warming up to is this: in the absence of a much desired sequel game, Blockade Entertainment will be making a CGI film which will likely tell the story described in the video game. It seems fitting that one of the first truly cinematic games, compelling and widely popular, should have its own movie. In fact, it seemed inevitable, so much of the groundwork for such a film having already been laid. Here’s a first look trailer:

More information will be released as time goes on, I’m sure, since we’ve been left with a number of black boxes on this new film. Chief among those being the apparent absence of Andy Serkis, the motion capture genius who did much of the work for the first game, and whom you may know from his mo-cap work as Gollum in the Lord of the Rings films. As Kotaku notes, this is hopefully a sign that he’s working on Heavenly Sword 2: The Swordening, or something like that. If you’d like to see what kind of material the films creators will be working with, check out the animated shorts that served as prologue and publicity tool for the game, enshrined in this Youtube channel.