Coming off the high of Child of Light, I didn’t really expect to see another indie-like game that would catch my interest for a while. Especially with E3 just around the corner, gamers and companies alike are rearing up to either bask in the light of Triple A titles and gimmicks that’ll become more lame after the hype train leaves the station, or huddle in a corner waiting for this all the pomp and circumstance to blow over. I’m incredibly pleased, however, that Never Alone managed to break through right before all the E3 buzz.

END_OF_DOCUMENT_TOKEN_TO_BE_REPLACED

You might be saying to yourself, “wait, this isn’t a trailer,” and you’re right. But given my love for the Borderlands series, I wanted to hop on this as soon as I could. So, yeah. A new Borderlands game.

…This is hard for me to get into because feel like I should be excited for this—a new game so soon and with world-expanding elements? It sounds so perfect, like everything I ever wanted. I’m just not excited, though. The only feelings I can muster are ones of acceptance and moderate disapproval—not feelings I want to associate with this series. Looking at the consensus of the fandom, I hate to say it, but I’m far from alone in feeling this way.

END_OF_DOCUMENT_TOKEN_TO_BE_REPLACED

“Do you have a demonic side? Have we got a job for you!” claims the trailer for Arthur de Pins’s big screen adaption of his graphic novel, Zombillénium. The irony is that they probably don’t have a job for you. Why? Let’s just say you don’t have the right credentials. From the graphic novel’s teaser:

This certainly sounds interesting in its own right, but the movie’s synopsis gives newcomers a deeper look into the darker aspects that will be showing up in the film.

In Zombillenium, the amusement terror park, monsters have the blues.

Not only zombies, vampires, werewolves and other demons are real monsters, whose souls belong to the devil forever, but they are tired of having to entertain consumerist, voyeuristic and selfish humans…

However, when little Lucy, a nice 7-year-old girl looking for her dad, is found by the skeleton Sirius and quickly adopted by all monsters, she will reveal their humanity and give them a good reason not to give up.

Souls sold to the devil? The negative impacts of consumerism? Those sound like pretty intense issues for what’s being advertised as a children’s movie, but I can completely get behind a kid’s film that’s willing to tackle said issues. 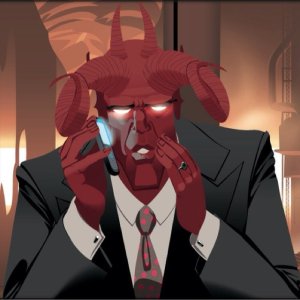 What do you mean kids can think critically about things? Preposterous! (Art by Arthur de Pins)

Any movie touted for children that doesn’t treat their younger audience as idiots is a blessing. And this isn’t me being selfish—I’m probably going to end up watching the movie for pleasure, along with a sizable portion of older viewers, regardless of the film’s intended audience. This is about raising standards of children’s media in general. The point of media should be to challenge our ideas while simultaneously bringing new ideas to light, an aspect that many companies seem to have forgotten—or are all too ready to ignore—when it comes to children. So if zombies are going to be taken once more from their tired and trite grave to get little ones thinking about important things à la ParaNorman, I’m ready to wholeheartedly support that.

Basically me.
(art by Kate Beaton)

Beyond my high hopes, the animation and artistic style for this film are beautiful. Lineless cell-shaded art is my weakness and ugh, everything is so fluid I might just shed a tear. I’m furious that I have to wait until August at the very earliest to see the film—as if I needed something else to add to my “I will sit here consumed with anticipation” list. However, I have heard nothing but good things concerning the source material, so I have high hopes that Zombillénium will be well worth the wait.

Though we’re in the midst of the tornado of news coming out of the Winter Olympics, there’s been some pretty big news in the video game world lately, too—so much so that I’ve decided to give you guys a two-for-one deal today. No need to thank me.

May as well get right into it. First, we have an either exciting or disheartening move (depending on your personal views) from Sega.

END_OF_DOCUMENT_TOKEN_TO_BE_REPLACED

Almost half a year has passed since the popular Bee and PuppyCat showed up on YouTube and took the internet by storm. I mentioned the series very, very briefly in one of my Web Crush posts, but the series hasn’t exactly gotten the love it deserves from this blog. A brief summary: a young 20-something, Bee, has recently been fired from her job and is looking for a new one. During the search, she comes across a cat which she then adopts and spoils with love. It turns out that this cat is an intergalactic warrior/babysitter and also may be a dog rather than a cat? It’s a mystery. But, the good thing is now that Bee has a job fighting space baddies next to her puppycat.

Actually, my synopsis does the series no justice. Why don’t you just watch it? The episode is only ten minutes and it’s totally worth it. Don’t worry, I’ll wait.

END_OF_DOCUMENT_TOKEN_TO_BE_REPLACED

Once again, the Mnet charts are dreadfully boring, and as we come ever closer to Valentine’s Day I fear this will continue to be the case. However, as I’m not in the mood for banal love songs nor interested in the surprising comeback song from Rain (seriously, he’s still making music?), I initially thought I would need to dig deep for this post. You can thank Lady Geek Girl herself for preventing that from happening—or you can thank my laziness, anyway. 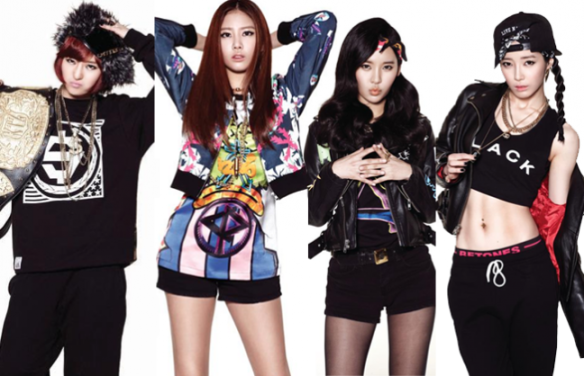 Two years ago in July the girl group GLAM—shortened from ‘Girls be Ambitious’—released their first single, Party (XXO) to moderate success. Or at least I’m assuming it was moderately successful, because last year they had a comeback single. Even so, outside of Party, I haven’t heard anything from them or anything about the group at all, which is really a shame. It’s true that they’re a talented group of women, but what’s even more important about them is that in an industry inundated with tradition gender roles when pertaining to romance, GLAM took the bold move to make an entirely LGBTQ+ inclusive song.

Are you excited? You should be.

END_OF_DOCUMENT_TOKEN_TO_BE_REPLACED

If there’s one good thing that spawned from the travesty that is the VGAs (Spike’s Video Game Awards), it’s the opportunity for different companies to interact with each other. And while Spike themselves seems like a channel that has absolutely no clue how to handle their demographic, this last year—in between the terrible hosting and the inept jokes—the audience was finally rewarded with a trailer to a game that could be the most beautiful thing I’ve ever seen.

Tales From the Borderlands combines two of my current favorites of the video game industry, Gearbox’s Borderlands IP and Telltale Games, into one delectable game series a la The Walking Dead. Expanding upon the huge, multi-planet universe, the game is focusing on two new characters: Fiona, who’s wanted for fraud, and a mystery dude who’s decked out in Hyperion gear—I don’t know if he’s half robot/loader or what, but he looks cool.

As with the theme of Borderlands, the obvious thing to think is that the pair is after one of the many treasures that’s said to lay hidden in Pandora’s wastelands. However,  I can’t see Telltale taking that route. Especially with the appearance of Handsome Jack, the big bad of Borderlands 2 who is also currently very dead, it seems like there’s much more to this side-project than meets the eye. END_OF_DOCUMENT_TOKEN_TO_BE_REPLACED

It’s no news to anyone here that I’m a huge fan of good translations. Honestly, who isn’t? It’s quality translations that lead to both an increase in interest in other cultures and media produced from said culture, as well as an increase in quality from the translation community as a whole. Both are super important aspects to a world that is increasingly opening its borders to each other. Although the cultural sharing that goes on between America and Japan is nothing new, what is new is how much VOCALOID—essentially voicebanks (with adorable personifications for each) that music composers can use to add vocals to their songs without using their own or employing anyone else’s—is starting to get into the American market.

Ranging from collaborative apps from Domino’s Pizza, western PS Vita ports of previously unavailable rhythm games, and even VOCALOID cameos showing up in popular web shows like Bee and Puppycat, the American market is in closer contact than ever with the counterculture of Miku Hatsune and the other singers that make up VOCALOID. Yes, I admit some of these songs can be rather tragic in quality, but surprisingly a majority of them are really good. Today, I want to celebrate one of the many, many translators of these VOCALOID songs, ColeenaWu.

END_OF_DOCUMENT_TOKEN_TO_BE_REPLACED

Just in time for the holidays—they’re coming up, all right? Give me a break—a new, longer trailer for the upcoming Ghibli movie The Tale of Princess Kaguya (輝夜姬物語) finally hit YouTube. To be completely honest, I think I’m more excited for this to get subtitled than The Wind Rises.

Yes, yes, I have respect for Miyazaki’s last work, but there’s just something special about the movies directed by Takahata–a difference that you may have picked up on if you’ve been keeping up with our Ghibli reviews. What it boils down to is that while Miyazaki goes after the fantastical settings and epic-quality plots, Takahata explores the more low-key aspects of life. Even Pom Poko, which was admittedly not realistic in the slightest, explores a general issue from a more narrowed lens. There are no countries at war, no devastation plaguing the earth. Instead there’s an issue or a story that affects a small portion of the world—a town, or even a family—which can be related to on a wider scale. In this way the two Ghibli directors complement each other perfectly, and will continue to complement each other until the very end: The Wind Rises deals with cross-continental relationships, both personal and professional, during World War II, and The Tale of Princess Kaguya deals with how a singular, momentary event changes the life of one family forever in ancient Japan.

END_OF_DOCUMENT_TOKEN_TO_BE_REPLACED

Today I had two clear choices when picking a song: G-Dragon’s newest hit to climb the charts, or the recent installment from the steamy, depressing, and gritty duo Troublemaker, staring B2ST’s Hyunseung and 4Minute’s Hyuna. Of course, I had to go with the artist(s) I was more invested in.

As much as I love the idea behind Troublemaker, their newest song Now is kind of boring. Besides, GD and I already have a relationship going on. After slamming GD hard in One of a Kind for being weird in all the wrong ways, how could I resist the chance to rip apart this toned down version in Crooked? Except, damn it, I want to, but I can’t. I love Crooked. I love it so much. Crooked’s the perfect anthem for angry teenagers that think a break-up is the end of the world—in other words, ridiculous. Right up my alley.