I know he’s a Nazi ghoul bent on world domination, but maybe there’s another side to this story?

The great joy of geek culture—whether it’s sci-fi, fantasy, or superheroes—is the ability to tell grand stories. Where else can we seriously consider the end of the world, or the responsibilities of ultimate power? These are the stories that always offer an escape from mundane reality, letting complexity fall away in favor of a clear mission.

In the past decade, these stories have dominated pop culture, from the way everything from Avengers to Game of Thrones has become inescapable—perhaps the public has grown weary of the multipolar diplomacy that has characterized the post-9/11 era. But these stories are letting us down. The relief offered by the simplicity of defeating comic book villains is no longer enough; we need to ask for more.

END_OF_DOCUMENT_TOKEN_TO_BE_REPLACED

It’s been nearly sixteen years since The Phantom Menace first came out—sixteen years! God, I’m old—and there is no shortage of negative critiques for this movie online. But now that Episode VII has been announced, I decided it was time to go back and revisit the prequels. While the Star Wars prequels are some of my favorite movies, they are very poorly written, and that’s especially true for Episode I. The Phantom Menace could be removed from the story entirely with the series losing very little, since the movie comes across more as a prequel to the other two prequels instead of as the first part of a trilogy. Nothing much of importance happens in Episode I—Palpatine becomes chancellor and Anakin and Padmé meet during an unexplored conflict about a trade blockade—and the story also has a distinct lack of focus. It’s not until Episode II that the Clone Wars begin and our main conflict gets going. 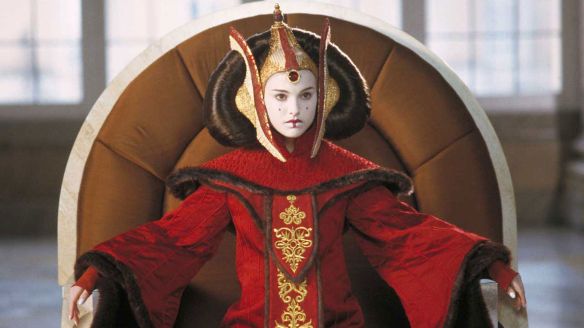 Not only is Episode I’s plot all over the place, but we wind up with four potential main characters. While this is not necessarily a problem, it becomes a problem when a movie doesn’t know what it’s doing. As a result, none of these characters are particularly developed, and it’s hard to tell which character is supposed to be the main character.

Out of all four of them, though, Padmé is probably the most interesting character, and her story arc has a lot more potential that everyone else’s. She’s a young, naïve queen, fighting for the liberation of her people, while at the same time trying to reconcile this need for violence with her own personal pacifistic beliefs. Or at least, that would be the case, had her character been better written, and had she been intended to be the main character. Regardless of what the writers wanted when they wrote this episode, Padmé is more connected to the plot than any other character, and she’s also the one with clear motivations we can relate to. What this means is that The Phantom Menace is potentially the first Star Wars movie with a female lead.

END_OF_DOCUMENT_TOKEN_TO_BE_REPLACED

The second season of The 100 has come to a close, and what a season it was. Numerous characters, including the main male love interest, were killed, Clarke became the CW’s first bisexual lead, and the Grounders and the Skypeople formed an uneasy truce and went to war with the Mountain Men. The entire second season was fun, exciting, and filled with twists and turns. Unfortunately, the last episode wasn’t as strong as it could have been. It wasn’t a bad episode by any means, but there were plenty of things about it that made little to no sense—and I’d already suspected the twist ending involving Jaha and Murphy episodes ago.