For the past few years, Netflix has been on a roll with the original content. Though at first Netflix was only known as a DVD rental site and then a TV streaming site, its forays into original content are now probably what it’s most known for. Shows like Voltron: Legendary Defender, Sense8, and the various Marvel Defenders series have all garnered (mostly) high praise, and with them to jump off of, it’s no surprise that Netflix quickly went from original TV shows to original movies as well. At the end of this year, Netflix is releasing Bright, a fantasy cop drama with A-list actors that looks to be Netflix’s bid at its next famous property. The trailer looks good, but I’m afraid it may raise more questions than it answers.

END_OF_DOCUMENT_TOKEN_TO_BE_REPLACED

A few weeks ago, we saw the trailer for Independence Day: Resurgence, a 21st century sequel and the latest attempt to cash in on the nostalgia of a millennial demographic which apparently has some disposable income left to grab.

It’s worth going back to the original—a soaring Roland Emmerich thriller about how no force in the universe could take down the United States: not when the president, a famous rapper, and a scientist all get together in a fighter jet to kick alien ass.

It’s the polar opposite of The Matrix. Rather than admitting even the slightest unease below the surface of American life, it barrels forward as a jingoistic romp, giving us America as a crotch-grabbing, trash-talking, hyperpower without a care in the world.

END_OF_DOCUMENT_TOKEN_TO_BE_REPLACED 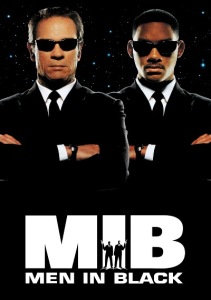 For this week’s installment of Throwback Thursdays, I want to give a throwback to another one of my favorite childhood movies—1997’s Men In Black. I’ve been feeling nostalgic lately and since it’s on Netflix in Canada, I’ve been rewatching it quite a lot and I find it’s still fun, enjoyable, and comforting.

Spoilers for the movie below, obviously.

END_OF_DOCUMENT_TOKEN_TO_BE_REPLACED

So now that both Lady Geek Girl and I have reviewed the trailer for this movie (here and here), I figured I’d subject myself to it, because why the hell not? As it turns out, “why the hell not” seems to be the driving motivation behind just about every scene in the movie, so yeah, why the hell not? I can’t say that I had that many high expectations for this film, and so I wasn’t disappointed in the least. Sometimes, I was remarkably surprised at hints of, dare I say, good writing. Other times, I was torn between laughing and cursing at myself for paying to go see this thing.

Obviously, there are going to be spoilers in this post. But before we begin, M. Night Shyamalan likes to work with twist endings. Some of you may be asking yourself what the twist is for this movie. Lady Geek Girl speculates that it’s that the movie takes place in a utopia where The Last Airbender movie didn’t suck.

The twist is that there is no twist. There’s some fear monster that Jaden Smith is terrified of, but at the climatic ending, he learns how to not be afraid of it. At just that right moment. He and Jamie from Rise of the Guardians seem to have a lot in common in that regard, except that Jamie wasn’t an annoying caricature.

END_OF_DOCUMENT_TOKEN_TO_BE_REPLACED

Yes, I know this movie just came out recently, but I haven’t seen it yet, and it only came out a couple days so I think I’m still within my blogger rights to review the trailer.

It’s summer time and Will Smith is in an action movie. That seemed to be the norm for a long time, but now that I think about it, I haven’t seen Will Smith in many movies lately, or at least many action ones. But this time it seems like the burden of providing most of the action actually is on Will Smith’s son, Jaden Smith. In After Earth, Will and Jaden play a father and son team that crash lands on… Earth? So apparently one thousand years ago humanity left Earth for… reasons, but now Will Smith and his son have crash landed there, and they need to retrieve some sort of beacon in order to get home. But there’s a twist: everything on Earth has evolved to kill humans now. Again because of reasons… reasons that I assume will be connected with some surprise twist ending about why humans left the planet in the first place. Maybe the plants killed people? No, wait, it’s all actually Jaden Smith’s dream, or it’s faeries, or normal people dressing in yellow robes to scare everyone and hide the fact they live in modern times. Or maybe the twist is that it’s set in a world where Avatar: The Last Airbender didn’t suck.

As you may have guessed from my thinly veiled sarcasm, this movie is directed by M. Night Shyamalan. Which leaves me in something of a conundrum when it comes to whether or not I should see this movie. You see, almost all Will Smith movies are good. That is just fact. Even if it’s not good in the sense that it has a good plot, it’s always at least entertaining and enjoyable to watch. But M. Night Shyamalan has, in recent years, been a terrible director, but his early movies were so good I think I just want to always given him a chance to redeem himself. The movie looks exciting. Furthermore, and perhaps most importantly, the movie stars two characters of color, which is something movies don’t often do, especially sci-fi movies. That alone might be the reason I see this movie, even if the plot seems to set itself up with one too many twist endings.

We’ll have to wait and see if this will be an exciting movie or another M. Night Shyamalan failure at making a comeback.

While I’m not the biggest fan of Will Smith or his son, I was actually really excited for this. Anything involving a post-apocalyptic Earth tends to grab my attention immediately. And this one doesn’t even seem to have anything to do with zombies, and yet humans are still no longer the dominate species on the planet. So I was already interested in what happened. I wanted to know how it came to be that humans are afraid of Earth. On top of that, Will and Jaden have appeared together in movies before, and being actual father and son makes their relationship on screen all the more real. So there are not a lot of instances in their relationship where I could see bad—or rather, unbelievable—chemistry pulling me from the movie.

I say I was excited because the movie’s director is none other than M. Night. Shyamalan—or, Shyamalamamon, as my brother likes to call him.

Maybe at one point Mr. Shyamalan was a great director, but his movies just seem to keep going downhill, and I honestly thought we would never see him again after The Last Airbender movie bombed for being a complete disaster. That movie was so bad that all of the characters’ names were mispronounced. The girl who played Katara couldn’t even say Avatar correctly. On top of that, I had no idea what was happening or why it was happening.

I’m worried the same thing will happen here. I’m worried that the characters will have no agency. That they’ll be cardboard cutouts. That the plot will be a convoluted mess impossible to follow. That we’ll be force-fed some annoying message that will take precedence over what’s happening on the screen.

So here’s me wishing that Shyamalan will turn around and produce something worth watching. But I’m afraid to get my hopes up.

It’s Trailer Tuesdays again! Let’s see what those big wig movie producers have for us today!

A great philosopher once asked, “Why?” I’m pretty much doing the same here. I love Will Smith, I love Tommy Lee Jones, and… oh hi, Emma Thompson what are you doing there! Love these actors, love Men in Black, so will number three be bad? Not necessarily, no, but I think this just makes me ask myself why there are so many remakes and sequels to things today. Don’t we have original ideas anymore people?! Yes Will Smith is funny and this does look yet another funny Men in Black movie so I will be seeing it, but I still have to ask… why?