It’s almost Halloween! Every Halloween I look for witchy movies, but sadly, the vast majority of them portray witches as evil and very very few of them even attempt to portray Paganism, Wicca, or witchcraft correctly. So recently, I attempted to look up Pagan and Wiccan-friendly movies and one movie kept popping up everywhere: The Last Keepers. I was pleased to find that it was on Netflix and sat down to give it a watch. It didn’t have the strongest story, but I can certainly see why it is a well-reviewed movie within the Pagan, Wicca, and witchcraft communities—though it is still not without its issues.

END_OF_DOCUMENT_TOKEN_TO_BE_REPLACED 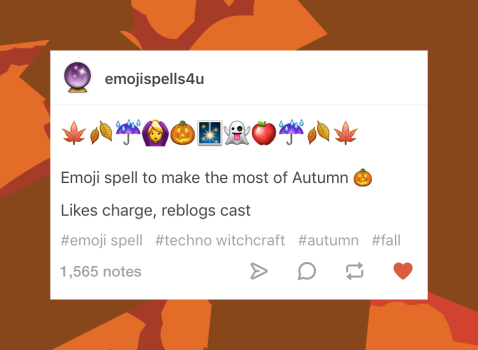 A few days ago the staff of Tumblr (you still have a Tumblr, right? We do.) promoted a post announcing “emoji spells” were “having a moment”. I couldn’t help but think about how unique this idea is, and at the same time, really isn’t. Emoji spells are a series of emojis put together with a similar intent to that of casting traditional spells. They’re popular with technopagans and operate under principles similar to traditional spellcraft, combining specific intentions with sending the spell out into the world multiple times. Instead of saying the words aloud thrice, likes and reblogs (or other forms of sharing specific to a digital platform) charge and cast the spell. Witches have used sigils, or symbols, that are experimental and unique to a specific spell. They turn an intention into a magic image, so emojis are the perfect vehicle for digital witchcraft. The more the emojis are shared, the greater charge they get and the more powerful they become, just as many voices are more powerful than one.

The reason emoji spells get so many reblogs and likes isn’t because there are an overwhelming number of Wiccans and magic-users on Tumblr (although there is a thriving community). It’s because people hope they work, it takes next to no effort to pass on today’s version of the chain letter, and if they don’t work, no one actually thinks any harm will come of it. That’s the key: we aren’t really sure if digital manifestations of religion really count in the same way “real-world” religious rituals and practice do. Even in the Wiccan, witchcraft, and pagan communities, practitioners of techno magic are looked down on. One way to start this conversation is to look at geek culture, and the way geeks have been encountering some of the most important fundamental elements of religion since the dawn of the internet.

END_OF_DOCUMENT_TOKEN_TO_BE_REPLACED

Welcome back, dear reader. You might be thinking, “That last The Witch post was so long; this guy has more to say?!” I do, in fact. While I tried to walk the reader through the muddled plot of the film in that post, this one will be a more personal, philosophical response to the film. I fear most people will leave the film simply saying to themselves, “That wasn’t scary enough!” and then shrug and forget about it; however, I also think there will be a sizeable portion who will lose sleep trying to ask themselves, “What does it all mean?!” I certainly fall into the second camp, and it is with particular urgency I ask myself that question. As one of the people in the world seeking to claim a connection on some level with the word “witch”, it is important to me to try to decipher as much as I possibly can, to pick the film to the bone for every last scrap of meaning, since the word “witch” is being flashed before the public imagination. It’s important to me to ask what it means that the film goes with the late medieval and early modern conception that witchcraft and Satanism are one and the same. Heck, the film was even endorsed by the Satanic Temple. Is the devil truly inextricably linked to witchcraft? Are witches damned, and if so what does that mean? Let’s take a look.

END_OF_DOCUMENT_TOKEN_TO_BE_REPLACED

Gentle reader, if you follow the blog closely enough to be somewhat familiar with the various authors, you might know that I consider myself something of a witch. Though I have at times tried to elucidate my spiritual leanings with descriptors such as “eclectic post-Wiccan shamanic neo-Pagan, with influences from Hinduism to Hellenism”, I find “witch” rolls off the tongue a little easier. Something about the richness of the word “witch”, the dark, damp, fertile history of the word, is one of various things that first brought me to Wicca so many years ago. Though at times I waver closer to or further from the word, I find it difficult to imagine a time when I no longer have any connections whatsoever to this potent word and its associated practices. So when I first saw word of The Witch spreading around the interwebs, my interest was piqued. The Wiccan Boom the 1990s promised me never came to pass, so there’s been a dearth of witchy media since Charmed went off the air, except for the recent fiasco that was Witches of East End. This was the first time I’d seen a movie with such an explicitly witch-themed title getting press and interest since The Craft. On top of that, even Stephen King voiced his approval on Twitter! Of course I had to check it out. 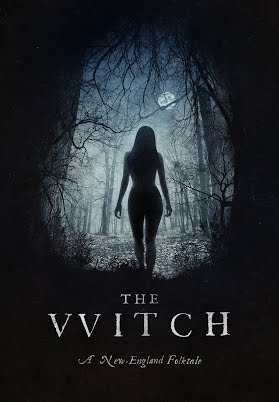 And check it out I did. I was hesitant to write a post about it after my first viewing; it conjured up (pun intended) so many thoughts and feelings, I worried I wouldn’t be able to make anything resembling coherence out of the juices of my mind grapes. But after a couple of days of processing, a second viewing, and hours of bouncing ideas around with my fellow author MikelyWhiplash (including the possibility of whether or not Taylor Swift is a witch), I think I just might be ready to tackle this haunting work of cinema. Did I like it? Hard to say: it is visually a macabre pleasure to watch, and I think it’s important for bringing witches back to the popular imagination. Enter with me the world of The Witch. Verily yon wood be filled with witches, and also spoilers.

END_OF_DOCUMENT_TOKEN_TO_BE_REPLACED

It’s that time of year again when witches, witchcraft, magic, and old-school pagan gods take certain stage on our television screens. Problem is, they don’t exactly have great PR, and every Halloween—and any other time of the year, for that matter—Wiccan and Pagan beliefs are pretty much dragged through the mud and shown to be “evil”. I have written about this poor portrayal before, but today I want to address how Christianity approaches modern Wicca and Paganism, and how that is reflected in pop culture.

Christianity has never exactly had a great relationship with magic practitioners and pagans. For centuries those who were accused of practicing witchcraft were often killed for “devil worship”, and the same is true for Pagans. Though the church did not necessarily deny the existence of pagan gods, they did claim that these gods were really demons that deceived people into worshiping them; because of this, worship of these gods was also considered devil worship and punishable by death. But this is a really old view of witchcraft and paganism, right? There is no way this belief still holds sway in today’s modern context, right? Sadly, that’s not the case.

END_OF_DOCUMENT_TOKEN_TO_BE_REPLACED

A few weeks ago, Lady Geek Girl wrote a nice article describing the precarious position of witches in current pop culture media. Witches only finally started to reach some level of acceptance (still a work in progress, that’s for sure) largely thanks to the enormous expansion of the religion of Wicca in the past fifty years or so. This led to a curious occurrence: witches weren’t just in fairytales and fantasy books anymore; they were bookstore clerks and nurses and teachers too. It opened the doors for the possibility for modern people to reclaim and identify with the word “witch”. We can see other seemingly outdated or maligned words being used by contemporary folk, from druid to heathen to shaman (though words like sorceress and wizard seem to be lagging in popularity), but I would argue none to quite the degree of “witch”. So while I believe that Wicca was a large—I would say the primary, in fact—reason for the modern reclaiming of this word, I think it is inappropriate to treat “Wiccan” as a monolithic synonym for “witch”. There are simply too many witches out there who are not Wiccan.
END_OF_DOCUMENT_TOKEN_TO_BE_REPLACED

I have already discussed magic a little bit in my post on magic and Christian objects. To give a little bit of a refresher, the Bible condemns witchcraft and any other sort of magic, from talking to the dead to seeing the future. But like many things in the Bible, this rule is contradictory to other things in the Bible and other practices in both Jewish and Christian traditions.

For example, most churches will say, even today, that seeing the future or talking to the dead could make you a prophet. If it’s a gift that you have no control over, it would make sense that your creator blessed you with it. On top of this, there are certain practices that seem to rely on magic. Ancient Jews used to put magical amulets near the beds of their babies to ward off the demon Lilith, who was said to kill children. In the Acts of the Apostles, there is a passage that introduces Simon the Magician, who wowed the people with his magical abilities. However, when the Apostles showed up, everyone converted to Christianity, even Simon. In this passage, Simon is never condemned for using magic; what he is condemned for is offering the Apostles money in order to gain the same gifts granted to the Apostles by God. Peter condemns Simon for thinking he can buy God’s gifts and urges him to repent, but he is never condemned for using magic specifically.

Despite these contradictions and varied ideas about magic, the Bible still condemns all magic and witchcraft, which causes tension between Christianity and Wicca to this day. That’s reflected in our pop culture.