I adored The Blue Sword by Robin McKinley when I was younger. How could I not love a story about a girl who’s swept into a magical world and becomes a knight? Having recently reread it, though, it does have a pretty problematic side.

The Blue Sword, published in 1982, is the story of Angharad “Harry” Crewe, an inheritance-less younger sister sent to live with her brother in Istan, a distant colonial outpost, after her parents’ death. Life in Istan is kind of dull, and so when she’s inexplicably snatched from her bed by the king of the local natives, she’s not that fazed. Riding with the king’s caravan, she discovers that she herself carries native (and noble) Damarian blood from a few generations back, and with this heritage comes access to kelar, the heady magical power wielded by highblood Damarians. Also known as the Gift, the power of kelar has waned in Damarian blood in recent generations, but Harry’s got it in spades.

With the kelar’s boost, she learns to ride and fight in the native fashion, and soon takes first prize in the Damarians’ great tournament. She’s sworn into the the service of Corlath, the king, and becomes the first female King’s Rider in generations. And when the nation is threatened by the demonic and inhuman denizens of the land north of Damar, she leads a scrappy force to cut off their advance—expressly against Corlath’s wishes. After an exhausting battle, Harry calls on the full power of her Gift and basically drops a mountain on the Northern army. She returns to Corlath expecting a rebuke or even a sentence of exile for leaving without permission, but is welcomed back with open arms—and a marriage proposal. The people of Damar are eager to accept their beloved damalur-sol (lady hero) as their Queen, and everyone lives happy ever after.

Harry is an interesting heroine; while she does train and gain skills over the course of the book, she has a supernatural advantage in the oddly sentient kelar; it wants her to learn to speak Damarian, for example, and she manages to gain a working proficiency in under a week. It gives her an edge in battle above and beyond what her training can, which is all well and good when she faces off against the Northerners but seems sort of unfair to use against other contestants in the tournament. She often describes her actions as the kelar riding her and steering her like she would her horse, and so while on one hand it’s cool to have a female hero who has such a magical gift (or Gift, I suppose), she also has a surprising lack of agency. She’s taken from Istan because Corlath’s kelar wants her with him. She trains to compete in the tournament at Corlath’s command, and often narrates her actions as the kelar acting through her rather than her acting of her own accord. The only thing she really does on her own steam is her decision to leave Corlath’s camp and go after the Northerners herself.

The Blue Sword has a bigger problem than just Harry’s agency, though: it’s kinda racist. Harry is almost a textbook example of the Mighty Whitey trope, defined by TVTropes thusly:

Mighty Whitey is usually a displaced white European, of noble descent, who ends up living with native tribespeople and not only learns their ways but also becomes their greatest warrior/leader/representative. 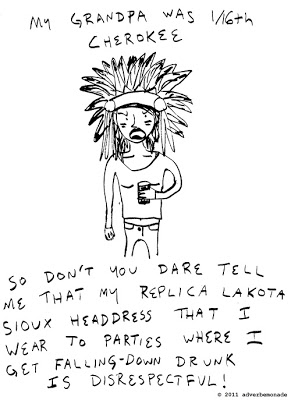 While Harry does have some Damarian heritage, it’s from a great-grandmother on one side. She was raised at Home, as the Homelanders call their native country, and is for all intents and purposes fantasy-white (the Damarians tend to a darker coloring, and Harry’s pale and blond). The kelar may have powered through her bloodline despite the distance of the connection, but as far as we’re concerned, Harry’s the fantasy version of someone claiming to be 1/16th Cherokee on their grandmother’s side. Now, Harry was totally unaware of her Damarian heritage. She wasn’t claiming to be something she wasn’t as some sort of excuse to appropriate the culture, as people who claim distant Native American heritage are generally trying to do.

But while Harry herself isn’t being appropriative, the narrative still is. The kelar acts as a handy deus ex machina that allows this white woman to become the perfect hero for—and representative of—the brown-skinned people. It seems as though McKinley wanted to have a Damarian protagonist, but couldn’t stomach the idea of said protagonist actually looking like a Damarian. Even making Harry’s heritage more recent—making her mother rather than a great-grandmother the Damarian ancestor—would make the story less awful; at that distance, Harry would probably actually look Damarian, for one thing. For another, it would make the narrative more interesting by replacing the conflict of Harry vs. stereotypical Homelander opinions of her femininity with the conflict of biracial identity in a society where one parent was the colonizer and one was the colonized. Or, Harry could have been adopted—maybe she didn’t realize until she arrived in Istan and saw people that looked like her that there was a good reason she didn’t take after her parents.

My biggest source of confusion after rereading is actually the casting of the Damarians as ~mysterious caravan natives~. It’s weird the way the book frames the Homelanders vs. the Damarians: it’s very clearly a play on Imperialist Victorian England and one of their colonies, but given the way that Damar is framed in The Hero and the Crown, which is a prequel to this story, it’s difficult to see how they got that way. In the first book in the Damar stories, The Hero and the Crown, Damar is an old dynasty in a more stereotypical fantasy-European style, although the majority of its people are brown-skinned. (Although, looking back at that, the heroine of that is also un-Damarian-ly pale. Hmm.) The events at the end of that book dramatically alter the landscape of Damar, making the land arid and dry, so I guess that’s where the desert-y part of The Blue Sword’s Damarians comes from? But given that the The Hero and the Crown was actually written after The Blue Sword, it almost seems like McKinley wanted to have her noble savage stereotypes and eat her European fantasy cake too; that is, she wanted to write a story based in a more European-inspired fantasy setting, but she spun the ending of the prequel so that it would justify the Middle-Eastern-ish “native” culture of The Blue Sword’s Damar. 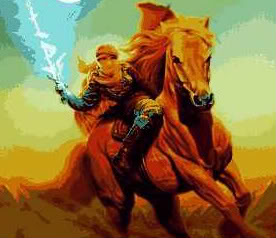 I want to recommend this book; it was a childhood favorite of mine, after all, and if you can look past the glaring racism it is an enjoyable read. But rereading it has left a bad taste in my mouth, and a fear of rereading the rest of McKinley’s books, which I also avidly devoured in my elementary school years. Who knows, maybe her other stories have less damaging premises? Only revisiting them will tell, but that’s a story for a different Throwback post. Till then!