I don’t usually read fic, and in fact, I’ve never written for this column before. I got burned one too many times by bad fic in my youth, and now I won’t touch a story unless someone has recced it to me. Well, boy am I glad that beanpots, an artist I follow on Tumblr, recommended the Yuri!!! On Ice fic The Rules for Lovers by ADreamingSongbird. It’s an arranged marriage AU in which Viktor and Yuuri are princes of their respective countries. Also it’s in an alternate history version of our modern world. Also, there’s magic! 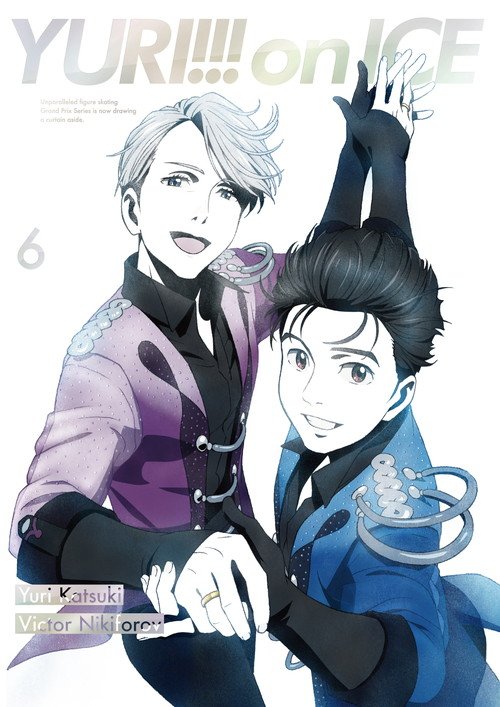 They’re already the princes of our hearts (especially in these outfits), so why not read about them as actual princes? (via fencer-x.tumblr.com)

The sort of urban fantasy premise of this story was enough to intrigue me. But what really convinced me to stick with this long, plotty work-in-progress was this scene from Chapter 1 right here, in which Prince Yuuri, wearing a flower crown that he had made to help him deal with his nervousness, has just awakened in the garden, where he accidentally slept through what was supposed to be his first meeting with Prince Viktor, his betrothed. Of course, it’s Viktor’s dog Makkachin who woke him (because Makkachin always has to be the catalyst for their “first meeting”!), and Viktor himself shows up, looking for his dog.

Nikiforov laughs.  He laughs, and Yuuri hates that someone who terrifies him like this has such a nice laugh.  If he heard that laugh from anyone else, he’d think that they must be a nice person, really.  But Prince Nikiforov is intimidating.

“Oh, don’t worry,” he says.  “Makkachin gets like this when he’s restless.  I’m sorry he got you like that, though!  Prince Katsuki, right?”

He says it so casually, as if there isn’t the weight of the sky attached to the words—so you’re the man I might marry.  So it’s you I have to be able to spend my life with.  Yuuri nods quietly, takes his glasses off, and wipes them on his shirt before he puts them back on.

“I am deeply sorry that I didn’t meet you upon your landing in Hinomoto,” he says, hanging his head.  The flower crown falls again, and Yuuri has the absurd urge to burst into tears.

Today feels like the beginning of the end.  The flower crown fell to the ground again, and with it so goes his freedom and his happiness—

Prince Nikiforov picks the crown up and places it back on Yuuri’s head.

And that was it. After that, I was a goner. I devoured the rest of the story, and I’ve been eagerly awaiting each new update ever since.

Even from just the above scene, you can tell how good of a grip author ADreamingSongbird has on these characters. She perfectly captures Yuuri’s anxiety about needing to marry this stranger for the benefit of his country. And Viktor is there trying to put all Yuuri’s worries at ease, absolutely charmed, placing the flower crown back on Yuuri’s head because it’s cute, dammit, and as the future king of Ruthenia (this world’s version of Russia), he’s going to make Yuuri a king one day too.

The story has all of the usual “arranged marriage partners fall in love anyway” goodness, but the author makes it interesting through her worldbuilding. It takes place in the modern day, but in an alternate version of our world in which magic exists and most countries are still ruled by monarchs. This gives it a fantastical fairytale element that is right up my genre alley (sports anime, on the other hand, is not my favorite genre, so seeing my current favorite OTP in a genre I love is just wonderful), while still allowing our favorite characters to send funny texts and Instagram posts—a mainstay of Yuri!!! On Ice. The plot is full of political intrigue and occasional action, which will likely pick up in the second half of the story, as Prince Viktor’s political opponents (all OC’s; no villainizing of canonical characters, don’t worry!) seem poised to strike. This is regularly supplemented by plenty of slow-burn, supportive fluff between the main ship, and friendly shenanigans with the secondary characters. 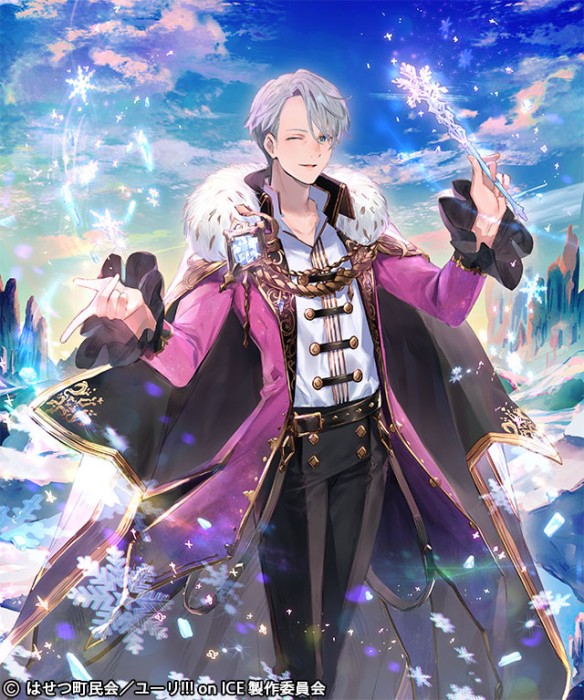 Just like in the Rage of Bahamut/ Yuri!!! On Ice collaboration pictured here, Viktor gets to be a prince with ice magic in this fic too! (via Crunchyroll)

Besides the genre, I love how in-character everyone is. This is exactly how I would imagine the characters reacting under these circumstances. Of course I love all the slow-burn romance between Viktor and Yuuri, both the cute fluff and the support in times of trouble. I love Yuuri’s interactions with his best friend Phichit, who’s an assassin with “shadow”-based magic in this fic. I love how Yuuri develops his friendship with an (as always) reluctant Yurio, who here is portrayed as Viktor’s younger cousin and heir. The female characters all get significant roles, such as Mari as heir to Hinomoto’s (i.e., Japan’s) throne, who still provides support to Yuuri after he moves away to live in his fiance’s palace, and Mila as a noble and friend in Viktor’s court, who even gets her own romantic side-plot with Princess Sara of Viteliu (i.e., Italy).

But most of all, I love how the author depicts Viktor and Yuuri as equals. Too often in this fandom, we only see Viktor helping Yuuri with his issues, and not the reverse. While Viktor certainly provides support to Yuuri as the latter copes with the anxiety of moving to a new country in order to spend his life with a stranger, ADreamingSongbird makes it clear how much Viktor needs Yuuri too. It’s lonely at the top, and dealing with politics can be soul-sucking. Viktor was suffering in silence, alone, until Yuuri came into his life to provide understanding and solace. And even during an action scene, the two end up saving each other’s lives instead of one clearly rescuing the other.

The Rules for Lovers, at ten chapters and around 140K, is a considerable time investment, but worth every moment you spend on it. It’s apparently only halfway finished, but ADreamingSongbird updates consistently every 2 weeks. The author can be found here on Tumblr, and the story itself here on AO3.

1 thought on “Fanfiction Fridays: The Rules for Lovers by ADreamingSongbird”