I’ve been told that it’s a crime I haven’t seen Iron Man 3 yet. I’m waiting for the crowds to die down. I swear I’ll see it this weekend and write about Tony Stark’s problems for Saturday.

In the meantime, I feel like I need to lead into that post by talking about Tony’s comic book demons. Specifically, his alcoholism.

You see, in 1979, David Michelinie and Bob Layton penned a 9-issue story called “Demon in a Bottle.” The story is considered necessary reading if you enjoy the Iron Man comics. 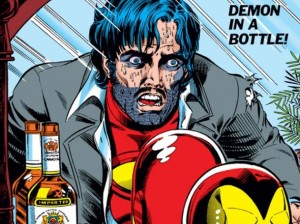 Stark’s descent into the bottle was a new turn for comic books. Stark at the time was a high-profile guy in Marvel Comics. He was the leader of the Avengers. He was competing with Captain America as the face of Marvel.

And he was a drunk. 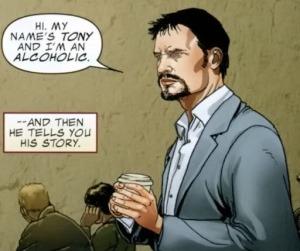 The history of alcoholism is lengthy. Currently, the Americans with Disabilities Act recognizes alcoholism, and really all addictions, as a disease. But in the 1970s, society was just beginning to consider alcoholism as a problem (source). Until then, alcohol was an important part of business, and any problems you had controlling your alcohol consumption just meant you were a weak human being.

So, for Tony Stark to admit that he had a problem was a big deal. This was a tough guy, a superhero, painfully admitting he was simply human.

While “Demon in a Bottle” is over 30 years old, it still holds weight for what it did for both comic books and for Tony Stark’s character. There was even discussion of using “Demon in a Bottle” in Iron Man 3, but it was changed to something else, which I will tackle Saturday.

Furthermore, Stark’s struggle with addiction has helped several people I know deal with their addictions. They weren’t afraid to admit their humanity because of the push they got from Stark getting help. A comic book story holding that kind of impact for so long is a big deal.