When I first started writing for Lady Geek Girl and Friends, I never thought I would join the ranks of our other lovely comic book reviewers. You see, I had never really gotten into American comics before; I prefer the aesthetic of manga. Well, that all changed on Free Comic Book Day this year, when my local comic shop lured me in with the promise of free comics, but convinced me to actually spend money too (which I suppose is the whole point of the day). I had heard that Sandman was a really great comic series written by Neil Gaiman, a writer I respect, so when I saw the first two issues of a Sandman prequel series there, I thought it would be a great place to dive into the saga.

The Sandman: Overture is a planned six-issue prequel series that tells the tale of the “triumph of a sort” that weakened our main character Dream so much that he was able to be imprisoned by mere mortals at the beginning of the first Sandman volume. Gaiman as writer is ingenious as always, and J.H. Williams III’s artwork is gorgeous, but let me warn you now: it turns out this is not one of those prequels that you can read before the original work. It’s not just that you’ll have trouble understanding what’s going on; the prequel actually contains spoilers for the end of the original series. But if you’ve read the original series and want answers to some questions (and don’t mind the raising of some new questions!), then Overture should be super intriguing to you. Find out more in my spoilerific review of Issues 1–3 below! 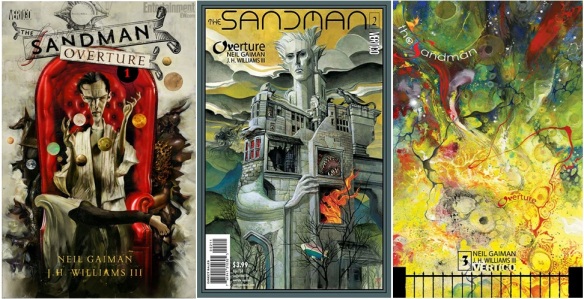 The very first page of Issue 1 brings us something new: we’re on a planet that isn’t Earth. The original Sandman series takes place entirely on Earth, or on planes like Faerie or Hell that are associated with Earth. It was never clear if there was sentient life on other planets in the Sandman universe—until now. Overture is all about life on planets other than Earth—and the Endless (i.e., Dream and his siblings) are there too. Thus we get to meet the Dream of Sentient Carnivorous Plants (don’t ask me) on this distant planet, and then abruptly bid him goodbye as he burns to death.

This sets off a chain reaction that pulls the Dream of Earth halfway across the universe, wrenching him away from a confrontation with the Corinthian. He was about to uncreate the Corinthian all the way back in 1915! Just think how many eyeballs could have been saved if not for this inexorable summons.

In a spiral of black cloak and fire, the Dream of Earth arrives in a magnificent fold-out spread of a landscape full of… Dreams. Lots and lots of Dreams. Some humanoid, some animal-like, some robotic, a few even vaguely feminine-looking! And with that end to Issue 1, we are all left saying, “What?” just as Dream does.

Issue 2 tells us more about this giant Dream conference. Apparently they are all from different planets and are all aspects of the same Dream; they all share Morpheus’s black and red aesthetic rather than the green and white preferred by Daniel-Dream (whom we’ll discuss more in a minute). But they seem semi-independent; they do not remember being each other until they are together, and only then do they realize that one of their number has been killed without a successor set up to take his place.

This semi-independence is confusing. Back in Issue 1, Death told Destiny that she took the Carnivorous Plant aspect of Dream, but the Dream of Earth wasn’t aware of it yet. So why was Death aware? Does she, unlike Dream, have only one omnipresent aspect for the entire universe?

Also, interestingly, the oldest aspect of Dream is a creepy, hooded, tentacled figure, so we can add “Lovecraftian Elder Gods” to the list of pantheons that Gaiman has referenced in Sandman.

Glory turns out to be an old white guy with muttonchops. I think we’ve actually seen him before in the “Dream” chapter of Endless Nights. But basically he likens what’s happening in the universe to an organism with cancer, in which a single cell misfires, leading to the destruction of the entire organism. In this case, the “cell” leading to the “cancer” is a star that went mad. Dream doesn’t understand why he should care, but Glory says this is all Dream’s fault because he allowed a Dream Vortex to live.

Am I the only one seeing this parallel?

So who’s the Dream Vortex who Dream allowed to live? Nada. Remember her? Kind of hard to forget her when pretty much all of Season of Mists revolves around her. Now, it’s not certain that this is the vortex that Dream and Glory are referring to. But it had better be, because Nada is the first important character of color that Gaiman included in Sandman, and she ended up condemned to Hell for ten thousand years because she refused to stay with Dream—which, may I remind you, was in fact the right decision because their tryst had already destroyed her kingdom and driven her sun mad. Sure, in Season of Mists, Dream eventually sets her free and tries to make it up to her by letting her reincarnate into a new life. But this was never really satisfying for me, because, from a critical perspective, what this said about people of color was that they just had to endure thousands of years of oppression until the white people (and Dream is almost always very pale) come along and save them. She was never able to free herself. She had next to no agency.

So if the Vortex who drove the star mad was in fact Nada, that ultimately allows her revenge to stretch across the entire universe. It says that mistreating even one mere mortal—yes, even one with dark skin—as badly as Dream did actually has universally negative consequences. Dream has a notorious track record with mortals, especially female ones, so this is a lesson he badly needs to learn. It would add a lot of nuance if it turns out he started learning this lesson even before the original Sandman series began.

So, yeah. This had better be all about Nada.

A couple more interesting things in this issue: it ends with the Dream of Earth and the Dream of cats going in search of their father (!), and we get two pages of this lady:

Doesn’t she even look like the Genesis Frog from Homestuck?

She doesn’t seem too concerned about the impending war that will end the universe. Could she be the mother of the Endless?

Finally… Daniel-Dream. (For the sake of clarity, I will continue to refer to him as “Daniel-Dream” even though he would hate that.) He goes to visit Mad Hettie (the 272-year-old London vagrant) in her dreams where he finds a pocketwatch that he then sends… away. Where? Back in time, perhaps?

This scene with Daniel-Dream in Issue 2 clearly takes place sometime after The Wake. In that sense, it is a sequel scene, and that makes Overture not really a prequel anymore. Since I read this issue before I read the original series, I am still kind of fuming about it. Issue 2 should totally have come with a big ol’ SPOILER ALERT warning across the cover.

This is the number one reason why you can’t read Overture before the original Sandman series! When I first read this, I was so confused when everyone kept treating this kid who was clearly not Dream as if he were Dream!

Issue 3 is chock-full of revelations too. And it also has its fair share of foreshadowing (we run into the Ladies; that should tell you all you need to know about how much foreshadowing is in here). Dream and Cat-Dream walk across a desert that’s a bridge to the City of Stars, where stars meet to conduct starry business with each other. By the end of the issue we’ve realized that the Dreams in fact have two goals: talk to their father and confront the mad star that killed their Carnivorous Plant aspect.

Along the way, the Dreams find an alien girl named Hope who watched her father die at the hands of reavers. Dream is uncharacteristically kind to her. The Crone warned us about her—out of Dream’s earshot, of course. So I have to wonder; we’re getting close to the City of Stars. Could she be a star, without knowing it? Is she perhaps the mad star, and will Dream eventually have to kill her to save the universe? That sounds like exactly the kind of tragedy Gaiman is known for putting in his Sandman stories. Also, this is what Hope looks like:

Lost Nebula is even in Hope’s name. I bet she really is the mad star.

Blue, like the starry lady in Issue 2, and with cornrows, perhaps putting us in mind of Nada (though this may be a stretch). And with a name like Hope in a Sandman story, things can’t possibly end any better for her than they did for Delight.

When Hope asks Dream to tell her his best story, he gives her a doozie that fills in tons of holes in Dream’s past that we’ve been wondering about. We find out that those two gods from whom Dream fashioned the gates to the Dreaming and his helm actually managed to imprison him in his own palace and take over the Dreaming. We find out that Desire was the only one who could help Dream escape… by sending him a lover. We find out this lover was Alianora, who broke Dream’s bonds and helped him defeat the rogue gods. And Dream doesn’t tell this part to Hope, but we also find out that Dream was eventually an asshole to Alianora too (what is his problem?), and that’s why he let her go away to the skerry that became the Land, the central point of conflict in A Game of You. All of Dream’s past injustices are coming back to haunt him in this series, it seems. Good. I’ve always wondered why Gaiman put so many “Dream abuses his girlfriend” plots into his stories. But the more we find out about the women in Dream’s past, the more we see that he was never really allowed to get away with this behavior. What goes around always ends up coming back around… even if it takes ten thousand years. This punishment of the abuser is what we need more of in stories that involve abuse. The entire universe will remind you of what you’ve done; the entire universe will take its revenge.

So far, Overture is a more-than-worthy addition to the Sandman canon. It answers all the things you were wondering about (well, okay, not all of them), and brings up enough new questions that it’ll keep you waiting anxiously for the next installment. Thanks to J.H. Williams III’s extraordinary artwork, these are the first American comics I’ve liked enough to buy.  A lot of the art seems like watercolors, and most of the pages deviate from traditional panel structure, which is great, because restricting your comics to panels is boring! I don’t think I ever would have bought these if they weren’t so darn pretty. But thank God I did, because Sandman has literally changed my life, and I’m not done writing about it.

Keep a lookout for more on Sandman from me soon, and I’ll also be back to review Issue 4 when it comes out in October! In the meantime, go and check out for yourself this most beautiful of all Sandman stories to come out so far, and join me in this torturous sense of divided loyalties in which we both root for our hero Dream and also just wish somebody would give him a good swift kick off his pedestal. Sweet dreams!

13 thoughts on “Syng Sings the Praises of The Sandman: Overture #1–3”