I’m a latecomer in the Avatar: The Last Airbender fandom; I just finished watching the series a few weeks ago and I’m now making my way through The Legend of Korra. Even though I loved Avatar more than I’m enjoying Korra so far, both shows are great. But they’re not perfect. I can let a few things slide here and there, and they don’t diminish my enjoyment of the show. However, Book 2 of Korra contains one plotline that seriously bothers me: the relationship between Bolin and Eska. 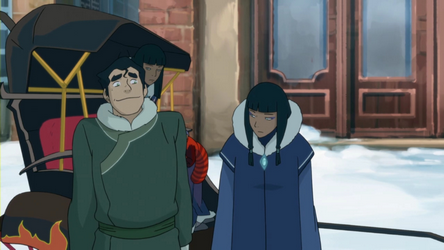 Yes, Bolin, I’m very uncomfortable about this relationship as well.

Trigger warning for discussion of dominance/submission, physically and emotionally abusive relationships, and PTSD. Also, spoilers for Legend of Korra Book 2.

Bolin and Eska meet in the Southern Water Tribe city, and Bolin takes a fancy to Eska from the moment he sees her. At first, they look like rather comical complete opposites: Bolin—funny, clueless, and expressive; Eska—aloof, logical, and emotionless. The animation of their body language and faces emphasize it: Bolin moves with comical flourishes and his face always reflects what he’s feeling, while Eska’s face doesn’t betray emotion at all and she doesn’t make any unnecessary movements.

Normally, this would be just the sort of gender-stereotype-defying relationship that I love. However, red flags start flying during the very first conversation they have, which ends with the following dialogue:

Eska: You amuse me; I will make you mine.

Bolin (clasping his hands together in a prayer-like way): You mean, like a boyfriend or… (face noticeably falling) or like a slave?

Eska (leaning in close to his face): Yes. (grabbing and lifting Bolin on his coat collar) Win me prizes. (drags him off, his hands still clasped)

There was no negotiation or consent to this.

To me this reads very uncomfortably as a dominance/submission type of relationship of the bad kind where no boundaries and safety measures are negotiated. It makes it an unhealthy relationship at best and an abusive relationship at worst. It appears that Bolin is scared and confused by what is going on, and in fact he likely doesn’t understand what is happening, since the show has previously established him as pretty clueless when it comes to romantic relationships. The change in Bolin’s demeanor during the conversation reflects this: at the beginning he’s his usual boisterous self, but his body language is quickly subdued and he appears scared and uncomfortable. It seems that he likes Eska and therefore doesn’t say anything about the relationship dynamic he’s uncomfortable with.

We’re supposed to laugh at this because, oh, look, his pet is also in the same clothes, but this is abuse and it’s not funny. (gif via korranation)

It only gets worse from then on, with Eska becoming more and more controlling. She doesn’t allow Bolin to interact with his female friends as he normally does: when Bolin goes to hug Korra after fighting off some spirits, Eska encases him in ice and separates him from Korra. Later on, when Bolin tries to break up with her, she forces him into an engagement, changes his clothes and hair, and gives him a traditional betrothal necklace. This necklace is traditionally given to the bride-to-be. It also looks a lot like a collar used in dom/sub relationships to signify that the submissive partner belongs to the dominant one, but it is very clear at this point that Bolin doesn’t want to be in this kind of relationship (since he tried to break up with Eska).

The most disturbing aspect of this storyline is that we’re supposed to find the whole ordeal Bolin goes through funny. Bolin’s cluelessness and comically exaggerated expressions, Eska’s perpetually sarcastic tone, the comedic timing, and the reactions of his friends all seem to be designed to make us laugh at Bolin as though getting himself into this kind of abusive relationship is somehow his own fault, and worse, a laughing matter. This, sadly, reflects the reality of female abusers and male victims all too well. Situations where a woman abuses a man are often not taken seriously at all. The men are laughed at and not considered victims because of the misguided gender-stereotyping notion that “real men” can’t be abused.

Bolin even asks his friends for help breaking free from Eska, but nobody takes him seriously. (gif via makos-lightningrod)

In addition to comical coding, the show sends other confusing messages about this relationship. For instance, Eska is quickly established as superior to Bolin in both strength and bending skill. She is the one who saves and protects Bolin from harm on several occasions, which Bolin seems to be comfortable with; in fact, he asks for her protection. Eska also shows concern for him on these occasions. But perhaps this isn’t so unexpected after all, because abusers often alternate between caring for and mistreating the other person.

Eventually Bolin runs away from Eska, but she turns into “a crazy ex-girlfriend” and comes after him, her make-up ruined by tears and her expression violent. He gets away, however, and it seems like nothing ever happened. But a couple episodes later, Bolin sees Eska on TV and jumps in fright. It makes me think that he actually has some sort of PTSD since he appears to be triggered by Eska’s appearance. Bolin makes a funny quip about it, which could be interpreted as him merely trying to hide his psychological trauma, but, disappointingly, the issue is never brought up again.

Bolin might profess his love to Eska later, but I think his first reaction upon seeing her again is more telling. (gif via korranation)

Eska and Bolin are briefly reunited during the final fight of Book 2 and he confesses that he loves her and wants to be together, but this time Eska says no. They both say that the other will always have a special place in their hearts and part ways. It’s like the abuse, the running away, and the PTSD never happened.

Of course, Legend of Korra is a children’s show, so perhaps it’s unrealistic to expect it to delve deeply into such heavy topics as partner abuse and PTSD. However, in that case, it shouldn’t feature such an obviously abusive relationship between Bolin and Eska at all. As it is, the message it sends (and let’s not forget that the intended audience here is children) is that it’s funny when a girl abuses a boy. It also teaches that in these situations, the abuser doesn’t face any consequences, while the victim doesn’t suffer any trauma. On the other hand, this show deals with plenty of other serious “grown-up” problems, such as cheating in relationships, sibling relationships, politics, freedom, and equality. So why not explore abuse and PTSD as well?

1 thought on “Sexualized Saturdays: Bolin and Eska’s Relationship Is Not Funny”