So my husband and I have been continuing our Disney marathon, and while we were watching I discovered something: The Lion King actually has a lot of racist themes, especially in regards to the hyenas. I think some people tend to not think of the movie as racist because it is set in Africa and launched a successful musical that features a huge cast of Black actors—which are all great things on their own. I love the musical and I still love the Lion King movie, but the movie actually has a ton of issues from casting to racial coding.

During my re-watch of The Lion King, I decided to look up the cast and I was dismayed to find that there are only five Black voice actors and only six voice actors of color total. Two of those voice actors aren’t in the movie for very long. Mufasa, played by James Earl Jones, dies at the beginning of the movie. Young Nala, played by Niketa Calame, is only in the very beginning of the movie and Adult Nala is played by Moira Kelly, a white actress. Sarabi, Simba’s mother, is played by another Black voice actress named Madge Sinclair, but is barely featured in the movie at all. Rafiki, voiced by Robert Guillaume, has a pretty prominent role but is largely an adviser to Simba and even then he takes a back seat to characters like Nala, Timone, or Pumbaa. Then there are Scar’s hyena sidekicks, who share a decent role in the movie, but only two are played by people of color, with Whoopi Goldberg playing Shenzi and Cheech Marin playing Banzai. With the exception of Mufasa and Young Nala, none of the characters are our main characters. They are all supporting characters or side characters who are barely featured. 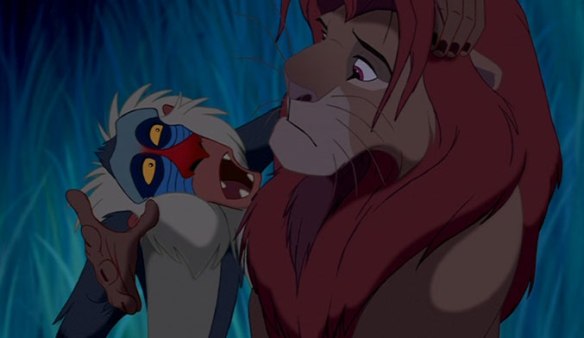 Rafiki, as I mentioned, has a decently prominent role, but only as an adviser or wise man to Simba. As an adult, Rafiki’s portrayal kind of bothered me because he is presented very much as what white people seem to imagine when they think of a shaman in indigenous African cultures. He doesn’t seem to be based on any particular type of shaman from any particular tribe and so in a lot of ways he just becomes the magical negro stereotype that paints Black/African culture as mysterious and primitive. This becomes worse when you realize that Simba is played by a white actor, making this into another instance of a magical Black character advising and assisting a white main protagonist.

Then there are the hyenas, and this is where the movie gets into some racial coding. While there are a lot of hyenas working for Scar in the movie, we only get to know three of them. Shenzi, Banzai, and Ed are Scar’s main henchmen and the only hyenas with actual speaking lines. Of the three, Ed is the only one played by a white voice actor, but he doesn’t have any real lines and speaks only by making weird noises and laughing. Shenzi and Benzai, however, are played by some of the few voice actors of color. While I’m usually excited to have more voice actors of color, especially for a movie set somewhere in Africa, it bothers me that the voice actors of color whose characters are still alive are playing the hyenas, who are portrayed as evil, stupid, lazy, and gluttonous. The hyenas speak using slang far more often than any of the lions, and constantly speak and act in such a way that makes them seem less educated than the lions. There is also a fair bit of colorism used to show that hyenas, and even Scar, are evil. The hyenas are all darker than the light golden brown lions, and Scar is the only lion colored differently, with a dark red coat and black mane. Even the elephant graveyard where the hyenas live is also portrayed as dark, even though it’s right next to Pride Rock, which is always bathed in sunlight. The movie constantly shows anything dark as being evil and anything white or light as being good. Furthermore, the hyenas are clearly discriminated against by the lions, but narrative teaches us not to sympathize with them.

When Zazu informs Mufasa that there are hyenas in the Pride Land, the reaction at the hyenas’ mere presence is one of fear, implying that their very presence is dangerous. Zazu refers to the hyenas as bad because they are scavengers, and this seems to be the only reason that the narrative gives us for why we shouldn’t like the hyenas—because they scavenge instead of hunting for their food. In other words, they take the hard work of other hunters instead of hunting for themselves. This sounds suspiciously close to accusations hurled at the Black community. Black women have been labeled “welfare queens” and poor Black people have been criticized for using government housing or food stamps. Heck, throughout history Black people have been labeled as lazy. This becomes even more sinister when you realize that Mufasa’s banning the hyenas from the Pride Lands means they are starving. The hyenas are forced to live in an elephant graveyard, in shitty conditions where they have nothing to eat. The hyenas join Scar because he brings them food and promises that they’ll never grow hungry again. During Scar’s “Be Prepared”, the hyenas are goose-stepping, meant to get us—particularly adults who will understand the Nazi associations—to dislike Scar and the hyenas. Even though Scar is helping the hyenas, it’s clear he still dislikes them, constantly calling them stupid, and he even blames all his failures on them after he is defeated by Simba. The hyenas are shown to not be as intelligent as Scar and are easily manipulated by him.

When Scar takes control of the Pride Lands, despite what he may personally seem to think of the hyenas, he does uphold his bargain and lets the hyenas move in. He even calls it a new era where hyenas and lions live together. This scene is painted as very dark, again showing that good = light and bad = dark dichotomy, with the lionesses looking fearfully on as the laughing hyenas move in. It’s painted very much as a “there goes the neighborhood” moment. And indeed, those “lazy, gluttonous” hyenas do ruin everything. Scar’s letting the hyenas move in literally destroys the Pride Lands. The hyenas, I guess, are somehow part locust because all the animals that are not lions or hyenas die or leave, there are no more grass or leaves, and there is even no more water. When Scar complains to Sarabi that the lionesses aren’t bringing in enough food, she tells him there isn’t any more food because the hyenas ate everything. The hyenas again are portrayed as evil and gluttonous, never sated no matter how much they eat, and of course, because they are scavengers, they just devour what the lionesses bring instead of hunting for themselves.

The hyenas never get any justice. They kill Scar after he blames them for everything, but seem to disappear immediately afterward. Simba’s reign brings about peace, somehow, because his very presence restores the Pride Lands. While The Lion King is set somewhere in Africa and there are a few voice actors of color who play good characters, for the most part a lot of the subliminal messages in this movie, when carried over to the real world, are very harmful toward people of color. While I have noticed this movie’s issues more as an adult, I know it affected me as a child. Watching it growing up, I did think the hyenas were lazy and greedy, and I certainly didn’t think it was wrong to essentially push them out into a ghetto where they had no food. While my young mind didn’t immediately connect these issues to issues between white people and Black people, I know it did make it easier for me to believe racist things like “Black people are good but the ones that just take welfare are lazy and shouldn’t get a hand out ’cause it will hurt our society as a whole”. Beliefs like that don’t seem too farfetched when the villains in your movies are portrayed the same way. This is why we need to be so careful with children’s movies. While I don’t think we can blame media for all people’s actions, the media we consume does affect us, so we have to be careful with what we consume. Or, in this case, allow our children to consume.

13 thoughts on “The Lion King and Racism”