You guys, I really wanted Sing to be good. Like, really badly. Despite seeing ratings that were somewhere in the “meh” area, I remained hopeful—movies mostly about singing (in a non-musical format) aren’t for everyone, after all. Yet as the credits began to roll I found myself echoing a sentiment used by our very own Ace earlier this week: Sing sure was a movie. It wasn’t a travesty or entirely unenjoyable, but I left with the feeling that maybe the writers at Illumination Entertainment simply didn’t know what they wanted to do with the plot and were too attached to showing different animals singing and dancing to pare the story down into something more coherent.

(via We Make Movies On Weekends)

From a young age, our protagonist, a koala named Buster Moon, has been infatuated with the theatre, so it makes sense in his older age that he’s in charge of the town’s singular theater aptly named Moon Theater. However, all is not well. Buster is in dire need of money after his last set of shows failed to bring in audiences, and both his workers and the bank are on his tail for their money. Lacking any patrons willing to dish out more charity, he decides that hosting a singing competition would be a great way to make some cash. Unfortunately, due to some typographical happenstance, what was originally supposed to be a thousand dollar reward ends up being mistyped as a hundred thousand dollar reward. Unaware of this misstep, Buster is filled with excitement upon seeing how many people want to try out for his show.

It’s at this point the audience is introduced to the subplot characters. First there’s Johnny, a young gorilla boy who is torn between a life of crime in his father’s gang and pursuing his dream of being a singer; Rosita, an unappreciated housewife and mother of twenty-some piglets who is slowly dying in her life of routines; Ash, the porcupine rocker chick who is forced to play second fiddle to her asshole boyfriend; Meena, a shy elephant girl who has the only supportive family in the movie; and finally Mike, a street musician mouse who’s a piece of shit con-man. All of these characters come to audition, with varying success, but somehow they all get called back anyway. More interested in success than exploring the talents before him, Buster immediately shoves all his contest hopefuls into musical stereotypes, whether they like it or not. As practice continues, all the characters must make a decision as to what’s more important to them—whether it be choosing between family and your passion or money and artistic integrity—and Mike’s decision almost ruins the entire show. While we have the more emotional journeys of Ash struggling to become independent from her emotionally abusive now-ex and Meena finding her own voice despite her intense shyness, Mike is living it up already spending the prize money that he hasn’t even won yet. In doing this, he incurs the wrath of the bear mob, who want him to pay back every bit of money he swindled from them. Mike, thinking he has that hundred-thousand in the bag, demands that Moon pay the mob; however, upon revealing that he only has that original thousand (not even entirely in cash), the bears destroy the Moon Theater.

After going through a crisis of faith, and with the support of the singing contestants—save for Mike—Buster reopens the theater for one night. Or, well, the group of them hold the show for free over the rubble of the Moon Theater. As the crowd grows larger with each act, people begin to remember the glory and wonder that the performing arts can bring. With the surprise success of their performance, Buster manages to find a new patron for the Moon Theater, returning it to its former glory. 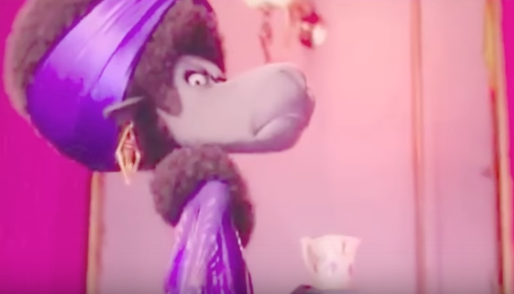 The Moon Theater’s now-patron, Nana Noodleman, is seriously one of the best characters in the film. And knows Buster is an idiot, so maybe the theater won’t go under again. Maybe. (via YouTube)

Sing, in theory, sounded engaging and cute, but one of its largest problems was how many subplots it had. Having so many different characters was truly great, and I loved seeing how they dealt with their own separate issues, but there was no way that a 100-minute film was ever going to be able to cover all their character arcs to a satisfying degree. While Rosita manages to learn how to let go and break free of her routine, her main problem—her husband being emotionally absent from their relationship—wasn’t necessarily solved. Her kids and husband loved her act, but that doesn’t mean that anything is going to change, and I can’t even infer that they did since there were no scenes of any of the characters after the final show. Johnny ends up ruining a huge heist for his father and his gang due to his commitment to the competition, which his father disowns him for. In the end, though, his father supports him despite having to go back to jail for his crimes. While we in the audience get to see the effect that not having his father’s support has on Johnny, we don’t get to see how now having his support affects him, which seems like a huge missed opportunity.

Ash gets to write her own songs and is recognized as a huge talent, and Meena overcomes her shyness and finally sings in front of an audience, but neither of these really feel like cathartic moments since the people who have kept them down don’t really get any comeuppance. With Ash, her ex is still popular enough to get shows with his new girlfriend, but his only “punishment” for treating her like shit is seeing Ash on TV and making an awed expression. And as for Meena, her main naysayer was Mike, and even though he’s blown away by her singing at the end, he never apologizes for being a total piece of shit to her during the rest of the movie. Their character arcs simply feel a little incomplete without this.

Personally, though, the character who suffered the worst from this was our protagonist, Buster. In fact, it wasn’t only his character arc that suffered, but the movie as a whole suffered from having him as its main character. You see, Buster Moon is entirely unlikable. He is a selfish, irresponsible man who learns nothing from his struggles. He continuously looks for people to give him money to take care of his theater rather than learning how to be financially responsible or accepting that he fucked up. Sure, after his theater is destroyed, he starts allowing his singers to be themselves, but outside of that, there’s barely any character progression. He gets a patron at the end, but does he learn how to be financially responsible? I doubt it, since this too was basically handed to him. (The theater itself was a gift from his late father, so he didn’t have to work for that either despite his father having to.) I have no reason to believe that the Moon Theater will now suddenly thrive except through the intervention of his patron. Although this may just be me as an adult thinking these things—I’m not sure how many kids would take into consideration fiscal responsibility amidst fart jokes and songs.

“Don’t let your dreams be memes” and other useless platitudes by Buster probably. (via Kidzworld)

However, one thing that I was thrilled about was how Sing had absolutely no romantic subplots. In my Trailer Tuesday from last year, I noted my hesitation about a potential forced hint of romance between Rosita and her show partner Gunter. However, I was delighted at how adorably platonic their whole relationship was. Gunter, a flamboyant performer, only wanted to see Rostia let her inhibitions go and perform as well as he knew she could. Honestly, I could watch a whole short on Rosita and Gunter hanging out and talking about their lives. Likewise, while Ash was devastated about her boyfriend cheating on her and breaking up with her, she doesn’t find comfort in the arms of another, but instead pours her feelings into honing her own craft, which is a great message to send to kids. No problem is overcome with romantic love of any sort; instead, Sing’s platonic relationship game is strong. Besides Gunter and Rosita, the whole cast (again, save for Mike) forms this sort of found family who supports each other when they’re struggling. The film surpassed my expectations there.

One last gripe I have with the film, though, is with its voice acting. I expressed my disappointment that most of the announced cast was white, and I really have to reiterate that. I find it especially strange that Meena was voiced by a white woman while the rest of her family was voiced by Black actors/singers. This makes me feel like the casting director didn’t think that audiences would be able to sympathize with a shy Black girl (despite her being visually an elephant), which is gross. And while we’re talking about race, while most of the animals remained racially ambiguous for the most part, one group of contestants was just so racist that I couldn’t believe they were there. During the competition, there was a group of young Japanese red pandas (I think). How could I tell they were Japanese? Simple: their act was a J-pop song, and they spoke entirely in Japanese without understanding any English. These characters just seemed so out of place in a movie that seemed to be promoting the acceptance of talent from all walks of life. I was glad when they finally exited stage left, looking just as insulted as I felt that Illumination deemed it funny or necessary to add them in the first place.

Sing is ultimately a movie I can’t really recommend to anyone unless they enjoy pop songs sung by well-animated animals. Yet I can’t really dissuade people from watching it either. While many of the characters don’t have a satisfying character arc, and a couple characters end up with more than they deserve, Sing still has good things to show its audience. I just wish they had focused more on the contestants than Buster. They were much more compelling.