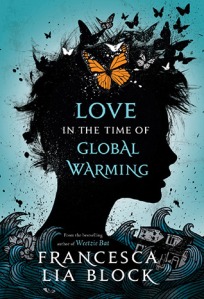 Let’s start at the beginning. Love in the Time of Global Warming by Francesca Lia Block is a dystopian sci-fi story—which is actually quite light on the sci-fi and heavier on literary magical realism, in my opinion, but I’ll get to that in a minute. We follow a teenage girl, Pen, on her quest to find her family through the American Southwest, which has been devastated by a giant earthquake and tsunami. During the course of her journey, Pen picks up a rag-tag group of friends and they have to battle monsters and mesmerizers, which mimic the obstacles the hero had to face in Homer’s Odyssey. And the best part—all the kids are queer and have superpowers!

END_OF_DOCUMENT_TOKEN_TO_BE_REPLACED

Lately, I’ve been on a young-adult-books-featuring-LGBTQ+-protagonists kick. Pantomime by Laura Lam, which came out two years ago, was on the outskirts of my radar for a while, because how often do you find a fantasy novel about a bisexual intersex transgender teen? Pantomime was definitely the first for me. It surprised me quite pleasantly with the inclusion of many other queer characters in a rather fascinating world, despite the fact that both the LGBTQ+ representation and the worldbuilding leave a little something to be desired at the end. But Pantomime is the first book in a trilogy, so here’s hoping that some of the potential will still be realized. Spoilers after the jump!