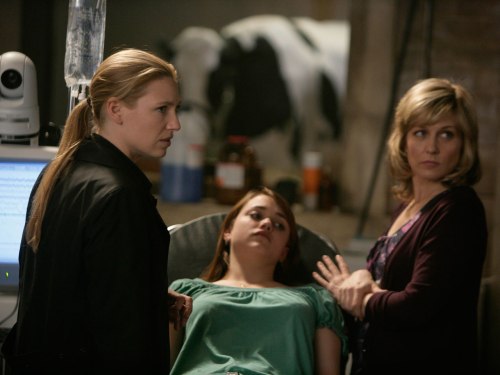 I’ve recently been binge-watching Fringe for the first time. It’s a series about the “Fringe” division of the FBI, where Agent Olivia Dunham and her team investigate strange and paranormal events, visit parallel universes, and save the day by being smart and badass. I honestly can’t believe it’s taken me this long to get into a show that’s three parts X-Files and one part NCIS. I found myself most intrigued by a strange one-off episode during Season 2 that was actually filmed in Season 1, but aired out of order on a different night for boring, time constraints reasons. Fans aren’t even certain exactly where it fits in the show’s timeline. It’s called “Unearthed,” and was panned by a lot of critics.

But this rather bad episode succeeds at one thing: giving its audience portrayal of a real religion that isn’t wildly offensive or inaccurate. It does a great job giving us a small window into what Catholicism looks like today. Catholicism pops up all the time in science fiction, maybe because its trappings are easily identifiable for audiences. I’m happy to see a show get a lot of the details right, even though it’s tucked away in an episode no one really cares about. The most shocking thing to me is that the narrative doesn’t make these characters into perfectly good Catholics, either. They’re much more real than what I’m used to seeing.

Spoilers for “Unearthed” below!