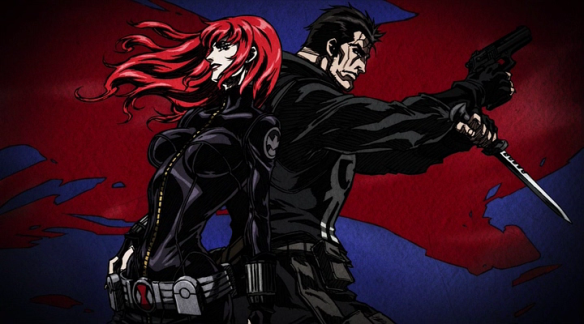 I was so excited when I saw this movie lying on a shelf at Toys-R-Us the other day. Like, wow; it’s a movie starring Black Widow and the Punisher. Chances are that it’s going to be a while before we get a live-action female comic book hero movie, and I was hoping that Avengers Confidential could help fill that void in my life in the meantime. I was wrong. Avengers Confidential ended up being a huge disappointment.

Our story opens with the Punisher murdering a bunch of thugs. Unfortunately, during his killing spree, he interferes with a top secret S.H.I.E.L.D mission, resulting in S.H.I.E.L.D arresting him. Now, at the orders of Director Fury, he and Black Widow must work as partners to stop a terrorist organization called Leviathan, which has stolen S.H.I.E.L.D technology to sell to the highest bidder. As a result, the whole world is in danger.

It turns out that a former S.H.I.E.L.D scientist—who also used to be Black Widow’s lover—betrayed S.H.I.E.L.D for Leviathan. He did this because, even though Black Widow returned his love, he didn’t think she did. Essentially, he felt friendzoned—so from here on, I’m going to call him Friendzone-Man. Friendzone-Man joined up with Leviathan because it gave him power, and he thought by having power, Black Widow could eventually recognize and love him.

Before I get into the horribleness of the Black Widow and Friendzone-Man storyline, let me just say that that is hardly this movie’s only problem. Avengers Confidential has a really odd artistic style. In some ways it feels as though this movie is trying to cash in on the success of DC animated features. Weirdly enough, it also has a bit of an anime vibe in some places as well, which, while not necessarily a bad thing, didn’t feel like the best choice. And though the story can look very beautiful in some areas—the action scenes were pretty cool too—the movie ended up feeling rather lifeless. 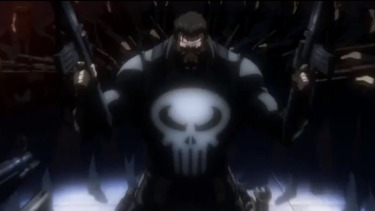 Most of the lifelessness comes from the voice acting. Everyone is horrible. But no one is worse that the Punisher. The Punisher ended up being the most uninteresting character of the entire story, and that was largely due to his voice actor. He showed no emotions whatsoever. Throughout the entire film, his voice was completely monotone. Even when his character reminisces on his fridged wife and children, there is no inflection whatsoever in his voice. I don’t know much about the Punisher, and maybe that’s how his character is supposed to be, but it made him rather boring to watch. If he can’t even be bothered to care about what’s going on, why should I be bothered to care? Unfortunately, the other voice actors aren’t much better, and there were no actors who actually sounded invested in this story. 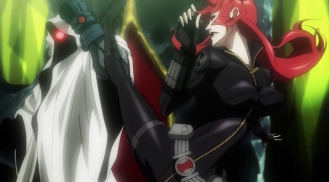 How the fuck is her spine not broken?!

Additionally, I have to question Black Widow’s character design. Though I will also concede that the Punisher has an incredibly unrealistic body type, at the very least, the visuals don’t treat him like a sexy prop. While Black Widow plays an intrinsic part of the story, it’s hard to view her character in any other light than by her body shape. The camera likes to scroll up and down her body, at any given time she’s thinner than a Barbie doll, and during her fight sequences, she pushes herself into positions that should have broken her spine. And she does this multiple times. Making this all the worse is the fact that her lemon-shaped breasts are both the size of her head. Sometimes larger. They tend to grow and shrink from scene to scene. I have no idea how her breast size alone hasn’t given her severe back problems.

However, nothing is more painful to watch than her interactions with Friendzone-Man. Their relationship ended up sending the worst possible message. It would have been one thing to have a male character be pissed off about being in the dreaded friendzone and for the narrative to talk about that. The friendzone can often be accompanied by feelings of entitlement, as if Friendzone-Man thinks he’s entitled to Black Widow’s love because he became evil to impress her. Essentially, he’s shoving his feelings of inadequacies onto her and making them her fault. He even uses her rejection of him to blame the deaths of all the people he murdered on her as well. At one point in the story—and frankly, the best moment of the entire movie—Black Widow just punches him in the face and screams that he better not dare to blame her for all the horrible things he’s done.

That moment was quite possibly my favorite, because we can see that those deaths are not her fault. His feelings of inadequacy are not her fault either. He is not entitled to her, no matter what he does to impress her, and she is not taking anything away from him by her refusal to be his scapegoat.

Sadly, though the movie could easily have used that storyline to send that more positive message, it instead enforces the idea of the friendzone as being this horrible place that is womens’ fault. Black Widow eventually forgives Friendzone-Man, transforming him into Un-Friendzone-Man with a kiss declaring her love. Now that he is Un-Friendzone-Man, he’s good and ready to help the Avengers defeat Leviathan. 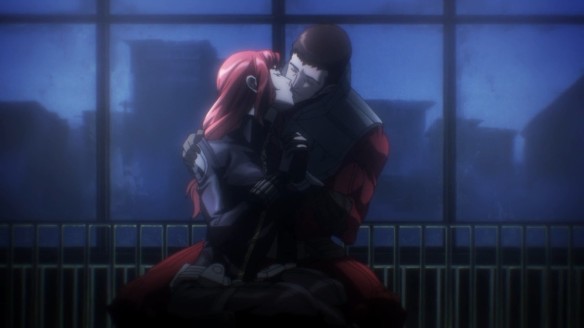 This is right after she punches him and the two have spent a good long moment trying to kill each other. Love?

I think I can safely say that Avengers Confidential is not the worst animated feature I’ve ever seen, but it’s certainly one of the least engaging. And I was entirely disappointed by Black Widow’s storyline and how her entire arc ended up defining her through her relationships. She is not an interesting character with a dark past in this film; she is a cliché enforcing negative stereotypical views against women. Avoid this movie at all costs.