Welcome to another edition of Throwback Thursdays! I want to talk about the sci-fi show of my childhood—Stargate SG-1. The story starts as an ancient teleportation device, the Stargate, is discovered in Egypt, and Dr. Daniel Jackson, an anthropologist, joins the team lead by Col. Jack O’Neill to explore the worlds connected by the Stargates. The team is also joined by Dr. Samantha Carter, astrophysicist and member of the U.S. Air Force. On one of their expeditions they meet Teal’c, an alien slave warrior. He betrays his masters, the Goa’uld, and joins the team. The Goa’uld are a parasitic alien race pretending to be gods, and they remain the main enemies of our heroes for most of the show’s run.

As a child, I loved this show because it was set “now” and the Stargate allowed them to travel to different planets without any tedious or scary space travel. Daniel and Sam were my favorites—as a child who would grow up to be a scientist, I related to their excitement and curiosity about learning about different planets, people, and technology. Now, as an adult, I decided to revisit my favorite series to see if it’s as good as I remember. I actually just finished watching the entire series. And, well, the result is mixed. But despite my annoyance at various offensive tropes, I still loved it, mainly because of the awesome female characters.

As Ace has touched on before, the show starts off sort of rocky: predictable, cheesy, and with a lot of white savior complex issues. Perhaps the most telling example is in Season 2, when the team’s equipment crashing on a planet makes the local people sick. The people are, of course, not very technologically advanced, and they don’t trust SG-1, but the team keep pushing their help. Finally, once they’ve figured out and fixed the problem, they get ready to leave and Sam remarks, “I have a hunch and I think we might be in the way.” Similar scenarios are quite typical for the first couple of seasons; intruding on less-advanced societies and insisting on “saving” them was pretty much their M.O. Fortunately, as the show progresses, things improve. They start encountering and pursuing alliances with advanced species and human races, as well as facing powerful enemies. There are even aliens who refuse to trade their knowledge with Earth because the Earthlings are not advanced enough. Stargate Command becomes more respectful to other planet’s cultures. And equally important, in the second half of its run, the show loosens up a lot, and even if it’s ridiculous at times, the series becomes a lot more fun.

I especially love the Nox. SG-1 mistake them for a very primitive people at first, because Nox are calm, quiet, and live in a forest, but they are in fact one of the most advanced species in the galaxy.

My main issue with most science fiction shows is their use of various misogynistic tropes and racial issues. Stargate SG-1 certainly suffers from some of them: the evil seductress, mystical pregnancy, most of the villains are people of color and hypersexualized women, and there’s only one woman on the main cast for most of the show. However, in certain aspects it does better than a lot of other shows. For instance, it tackles issues with bodily autonomy and consent: it’s generally women whose bodies and/or minds taken over by another life form, but in Stargate SG-1 at least, the Goa’uld take over bodies of all genders; if anything, men have it worse because they’re raised as slave fighters. The show also introduces the Tok’ra, who are the same species as the Goa’uld, but refuse to take over people who don’t explicitly consent. However, even with this juxtaposition, the show doesn’t explore the issue’s full potential.

Sam is just so cool.

But the main reason why I loved watching Stargate SG-1, all these years later, is Sam Carter. She’s an accomplished scientist and the member of the team to whom everyone looks when they need to figure out a piece of alien technology or an escape plan. Although her abilities are doubted by quite a few characters on the show due to her gender, her teammates and commanding officers always trust her judgement. Also, while she’s hit on by random misogynistic jerks from time to time, she’s not hypersexualized. At the same time, she’s also not unfeeling; she has a few romantic interests throughout the show, most notably her commanding officer, Jack O’Neill. They have a conversation about their feelings but decide not to pursue them for the sake of their military careers. And what makes it all even more amazing is knowing that we have Amanda Tapping, who plays Sam, to thank for the way Sam is written. At first, Carter was written very much as a straw feminist, but Tapping talked to the writers about it and as a result, Sam became a much more nuanced and interesting character who sends a much stronger feminist message. 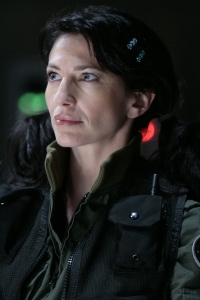 Unfortunately, for most of the show’s run, Sam is the only female character on the main cast and most of the female guest or recurring roles of note are either villains who are actually just host bodies for the Goa’uld or damsels in distress who need to be saved. But Season 8 introduces Vala Mal Doran. She’s a thief, con artist, and just a general ne’er-do-well. She recurs in a few episodes in Season 9, and becomes a member of SG-1 in Season 10. Vala, along with Sam, makes the sometimes downright ridiculous mess that is Season 10 watchable. She’s pretty much the opposite of Sam—she’s hypersexual (although not exactly hypersexualized, for the most part), she lies, disregards the rules, and takes over Jack O’Neill’s role as the show’s sarcastic comic relief; however, she’s also smart and over time earns her teammates’ trust. This is a pretty unusual combination of traits for a female character.

Finally, I’d like to note the relationships among the main characters, which is what ultimately glues a show together and kept me watching. And this is where Stargate SG-1 really wins. Due to the nature of their work, all the characters need to trust each other, and they do. They’re also friends and care deeply for each other, although it’s not shown explicitly in their day-to-day life. But then, for instance, Jack O’Neill disappears and you see Sam crying on Teal’c’s shoulder in silence, or one of the team members gets hurt and Jack spends the whole time next to their bed. Vala is a bit of wild card there, but even so, her friendships with Sam and Daniel are beautiful.

All in all, Stargate SG-1 isn’t perfect. It suffers from a lot of tropes plaguing sci-fi television. Its strengths are the main characters, Sam and Vala especially, and their relationships. As a child I loved the adventure, discoveries, and science. But watching as an adult, while I still enjoy those aspects of the show, I particularly love Sam and Vala because they represent very different complex women whom I can look up to, even now.