I can’t deny that Sailor Moon was my heart growing up. In the wider scope of cartoons/anime aiming for a younger demographic American audiences weren’t so readily exposed to these shoujo magical girls and doki doki gakuen series as they were shonen series like DBZ and its ilk. So, while I often liked to fight in the name of the moon, I ended up much more well acquainted with the hand motions to perform a proper spirit gun technique or trying very hard to ignore that Goku had been on the same battle for four days in a row.

These days, however, audiences have grown restless in their consumption of the same old tropes. We want more. When an anime comes out that attempts to deconstruct the genre, audiences flock to it hoping to gain some great knowledge from it, or some sense of satisfaction. When I started watching Mob Psycho 100, I wasn’t expecting anything mindblowing (despite claims from my friend otherwise), and it wasn’t. Don’t take that as a negative thing, because it’s certainly not. Shonen series are all about the capacity for audience’s minds to be blown, so much so that every arc tends to follow the pattern of the hero needing to get a ridiculous new power to defeat the new powerful enemy. Mob’s deconstruction of the genre comes from its refusal to bend to the shonen tropes that define its world, and the result is something purely human; nothing more, nothing less.

I’d like to introduce you all to my new son. (via kawaii-mtbi @ Tumblr)

Mob follows the life of middle schooler Shigeo Kageyama—nicknamed “Mob” by his mentor due to his lack of presence (like a “mob” in a video game; an undistinguished figure that blends into a crowd)—as he works with his mentor Reigen while balancing his blossoming school social life. Reigen runs a business dealing with the exorcism of spirits and various other spirit-related tasks. Reigen is also a complete fraud and relies on Mob’s very real, strong psychic powers to destroy any spirits that come their way. As the series’s twelve episode first season approaches its end, Mob’s brother and several other psychic children have been abducted by an evil group composed of other psychics, leaving Mob and his other psychic friend to help them escape.

There is one rule that defines Mob’s life: he is never to use his psychic powers to hurt anyone. This is both a statement enforced by Reigen and a self-imposed restriction, since Mob can’t always control his immense powers. This immediately sets aside the typical construction of a shonen series. The action-packed titles in the genre thrive off of the idea that the main characters are always battling, and through these battles, are looking to improve themselves. A character gaining a new power or overcoming a new foe is rewarded with pride (both internally and from the character’s friends) and more tangible things like allies, weapons, and so forth. Mob refuses this structure and goes on to show that power for power’s sake, in the hands of children, is not glorious.

To support this, the show forces Mob into scenarios where it seems as though he can’t help but fight back. Mob’s first true antagonist comes in the form of fellow middle schooler (and fellow psychic) Teruki Hanazawa. Unlike Mob, Teruki considers himself the protagonist of everyone’s lives; he used his abilities to climb to the seat of power in his respective middle school and is now the shadow leader of the delinquents. In any other shonen series, he would not seem out of place. Due to a series of mishaps, Mob finds himself face to face with Teruki after his clubmates have been knocked down by the ambitious teen. Yet where Teruki wants to fight Mob, Mob continuously refuses to fight back, only using his powers to defend himself, and sometimes not even then. The culmination of this battle only comes from a failure state in Mob’s eyes: he becomes overwhelmed, his powers go out of control, and Teruki is humiliated and defeated. There is no glory in winning, and neither of the two boys gained anything from the battle itself.

In the end, when Mob is breaking his brother out of the evil group’s lair, he and his small group find themselves in another typical shonen situation: the “good guys” and their powers versus the “bad guys” and their powers. All that matters in that moment is the strength of each individual. This balance shifts the moment Reigen enters the picture. As the audience has come to know by now, Reigen has no powers at all (except being a con man) nor is he a particularly good person; however, he brings up the point that changes everything.

This truth of shonen is something that rarely gets mentioned. Children are so often left to fight in adult wars against other adults, and that is especially true in Mob. While the evil group may have abducted children, 99% of the people Mob and his crew of middle schoolers had to fight were adults—adults who had no problem beating up and potentially killing a bunch of less powerful kids to achieve their goal. The genre dictates that we gloss over this, but Mob forces the audience to accept how fucked up this really is. It’s absolutely true that Reigen used Mob’s psychic powers to exorcise disorderly spirits, but for Mob, these exorcisms were as simple and painless as waving a hand (also surprisingly non-violent in most cases). Yet, Reigen didn’t impose his “no fighting with psychic powers” rule because Mob was too strong or he wanted to hoard the boy’s powers for himself, he imposed it because he wanted Mob to have as normal a life as he could, like any child should be allowed to have. He didn’t want Mob to be drawn into a cruel world of shonen heroes where neither friend nor foe give a second thought to the psychological consequences of fighting all the time and being denied this normalcy.

Mob works as a deconstruction because it has something important and valuable to say, both about the genre and the real-life world it was created in. Compare it to a series like Madoka—which, no, I will never stop bagging on. Madoka fancies itself a deconstruction from its aesthetic alone, but what use does its message of “hoping is bad, now watch this little girl suffer for all eternity” serve? How does that make its audience think? Mob accepts that people with power are always going to fight, but it also wants its audience to think about who is being forced to fight and why. The delinquents from the schools fighting each other are given moments to show that they’re regular kids like everyone else—they’re not shown nearly as negatively as the people in the evil organization. When one of those evil folks tries to give his tragic backstory, Reigen steps in and essentially says, “cool backstory, still attempted murder”, reinforcing that while there is violence on both sides, violence between kids is not on the same level as adults perpetrating violence on children.

Furthermore Mob clearly establishes how to achieve self-improvement in a healthy manner. Mob’s one true goal in the series is to improve himself so he can make friends and be popular. He has the chance to expose his powers and be used by the school’s Telepathy Club to gain friends that way, but he decides against this. Instead, he chooses to join the Body Improvement Club. Though Mob is just utterly awful at doing all things physical, he puts his all into growing in this very normal, non-powerful way. Due to his efforts, he gains the respect and true friendship of the physically imposing members of the Body Improvement Club and stays true to his morals along the way. Later on, Teruki, likewise, learns to grow as a person after accepting that his powers shouldn’t be the only thing that define him. He becomes friends with Mob because Mob didn’t fight back and give into the selfish need to prove himself all powerful. 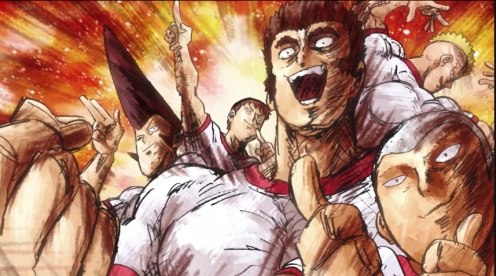 TFW your friends love and support you even though you’re not on their level yet. (via Reddit)

I don’t believe that shonen series that focus more on exciting battles and getting more powerful are inherently harmful. I do think, however, that it’s important for more series to accept and talk about the incredible mental toll on its characters, especially on its younger ones. Moreover, it’s important to show that it’s okay to feel overwhelmed by responsibility, and there’s strength in denying the stereotypical definition of “strength”.  What both kids and adults will end up taking from this, I hope, is that power imbalances are something we need to be aware of at all times. Additionally, they’ll learn that you don’t have to fight to be a strong person. Mob’s determination to not use his powers for combat and only to help people is one of the aspects that people around him admire—his brother even calls him the strongest person he knows. But what I hope Mob Psycho 100 really heralds is the feeling that deconstructions don’t have to be so grimdark all the damned time. A deconstruction can be a kid, his family, his adopted dad, and his friends, too, and the normalcy in that is nothing to avoid.