So I recently read the first chapter of the re-release of the Rurouni Kenshin series that Lady Bacula promised us so many moons ago. 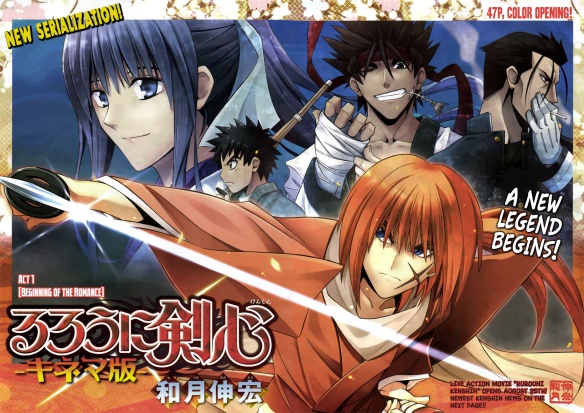 Going into it, I was super confused. It’s been a while since I read the series (goddamn, has it really been almost six years since high school?) but I wrote my undergraduate senior thesis partially on Rurouni Kenshin, and so I just watched the whole anime last year. (Ah, research.) And I don’t remember pretty much anything happening in the show or original manga the way it happened in Rurouni Kenshin: Restoration.

Kenshin meets Kaoru and Yahiko at a kendo tournament being held by Takeda Kanryuu (you may remember him as that crazy guy with the gatling gun). Kenshin is outed as the Battousai when Takeda gets gatling-happy, and proceeds to kick Takeda’s ass. But wait! Takeda has a whole army of thugs in waiting that he plans to sic on Kenshin and company in revenge, including Sano and Saito!

I was actually so confused about this weird plot development (No Oniwaban-shu and therefore no Aoshi? Why is Aku-Roku-Zan justice-happy Saito working for Takeda of all people, isn’t he a policeman?) that I had to I look into it.

And understanding was granted from above. (Or at least from Crunchyroll.)

So apparently in Japanese this reboot isn’t called “Restoration.” It’s called “Kinema-ban”, as in, Cinema Edition.

Rather than being a proper reboot of the series (comparable to, perhaps, the original FMA series versus FMA: Brotherhood), this manga appears to be intended as a sneak-peek or plot preview or even companion piece for the live-action Rurouni Kenshin movie coming out in Japan this year.

And that’s cool! It’s interesting to see how the plot and characters are being tweaked to fit into a movie plot, and with that context, the changes make some sense. I just wish that that context had been given straight-up rather than letting this be billed as a brand-new re-serialization of a story that was pretty damn perfect as it was.