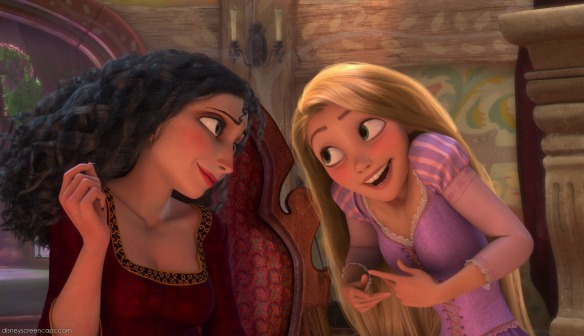 A friend of mine and I were discussing Tangled recently, and when I asked him why he hadn’t liked the movie, he replied, “It was just too dark to be a kids’ movie.” It took me a while to understand what he meant by that—surely a movie about a princess and her animal companion friends wasn’t dark? Then I realized that while the characters themselves may not have been particularly bleak, the theme of the story was. The driving force behind Tangled is the twisted relationship between Rapunzel and Mother Gothel, and understanding it is key to understanding why Tangled was such a great movie.

For those of you who haven’t seen the movie yet, Tangled is the story of a girl, Rapunzel, the daughter and only heir of the king and queen of a fictional country. While pregnant with Rapunzel, the queen got very sick, and so the king dispatched troops to look for a magical golden flower, which, according to myth, had grown from a “single drop of sunlight that fell from the heavens”. They found it, made it into a tea for the queen to drink, and she miraculously got better. When Rapunzel was born, she had lovely golden locks the same color as the flower. 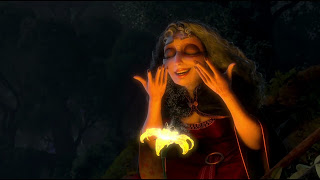 However, Mother Gothel, the villain of this story, had been using the flower at intermittent times to restore both her youth and her beauty, and she was furious at the disappearance of the flower. She tracked down Rapunzel and discovered that the flower’s magical healing properties had been transferred to Rapunzel’s hair. When she attempted to cut a lock of hair to keep for herself, the lock turned brown and lost its power. Enraged, she stole Rapunzel from the palace and shut her up in a tower so that no one else could ever use (or cut) Rapunzel’s hair.

So Rapunzel grew up believing that Mother Gothel was her biological mother. Gothel tells her that the outside world is a dark and dangerous place, and that she couldn’t possibly handle herself out there. When Rapunzel notices the “floating lights” that cross the night sky on every one of her birthdays, she’s determined to go see them on her eighteenth birthday. Gothel, of course, won’t let her. This is where we can really see the truth of Gothel’s character. She’s not just an authority figure, as ScreenRants puts it:

What is also fascinating about this film is that the villainess (Gothel) masks her villainy in the guise of love. She does not have the wealth of Cruella De Ville, nor the magic of Sleeping Beauty’s Maleficent. She is only equipped with an arsenal of emotional manipulation and self-esteem grenades, designed to keep Rapunzel afraid of the world and herself. As such, she is an amazing archetype for the devouring mother that many women must (to greater or lesser degrees) face in order to get free, and fully come into their own.

Gothel: How you manage to do that every single day without fail! It looks absolutely exhausting, darling.
Rapunzel: Oh, it’s nothing.
Gothel: Then I don’t know why it takes so long!

Along with these back-handed compliments, Gothel constantly belittles and insults Rapunzel under the guise of motherly “teasing”. “You know what I see?” she tells Rapunzel, as the two of them stand before a mirror. “I see a strong, confident, beautiful young lady. Oh

look, you’re here too.” When Rapunzel looks sad and offended, Gothel lightly tells her to stop taking everything so seriously, thus invalidating Rapunzel’s legitimate feelings about Gothel’s words. When Rapunzel asks to see the lights for her birthday, Gothel demands, “You want to go outside?” and launches into the song “Mother Knows Best”, in which she makes Rapunzel feel guilty about her desires, dramatizes the horrors of the outside world, and says that Rapunzel is too immature, clumsy, and ditzy to venture out into the world. Gothel calls her “pet” and “flower”, tells Rapunzel she’ll keep her safe and sound while simultaneously rubbing her face in Rapunzel’s hair, and, in short, views Rapunzel as more of a possession than a human being.

Even though Rapunzel has a vibrant, energetic personality, years of continued abuse have clearly taken their toll on her. When she leaves the tower with Flynn Rider, she simultaneously can’t believe that she’s finally outside, and she can’t believe that she’s been such a horrible daughter as to betray her mother’s most stringent wish. When Flynn expresses begrudging admiration of Rapunzel’s charming the criminals of the Snuggly Duckling, Rapunzel’s first reaction is to say “I KNOW!” in an incredulous voice, as if she can hardly believe herself capable of such a thing. Most tellingly, when Rapunzel is telling Flynn why she must stay in the tower, she shows Flynn her one lock of brown hair as evidence of the danger the

outside world poses to her and says, “That’s why Mother never let me…” and pauses. “That’s why I never left,” she concludes. She’s internalized Gothel’s abuse to such an extent (and Gothel has so isolated Rapunzel from any other points of view) that Rapunzel fully believes it was her own choice, and the right choice, to never leave the tower. In her eyes, Gothel hadn’t even done anything wrong—she had just been protecting Rapunzel.

In light of all this, it makes sense that Rapunzel doesn’t see herself as a capable, strong young lady. But what’s so insidious about this movie is that some of the audience can no more see Rapunzel’s strength than Rapunzel can. As a reviewer from TIME said:

Ignored in all versions [of the Rapunzel story] is this question: If Rapunzel can secure her tresses to a hook to allow the witch to climb up and down, why can’t she hook the end of her coiffure and climb down it?

Understanding the mindset of a survivor of emotional abuse is key to understanding Rapunzel’s very real agency in Tangled. Mother Gothel is the scariest villain in Disney’s arsenal, bar none, because she is so frighteningly real that people who haven’t experienced or studied abuse might not realize the extent of what she’s doing. It’s through Gothel that Disney portrays a theme not often approached in Disney movies: emotional abuse. And their portrayal of it was so subtle that a lot of viewers never realized what they were seeing.

Rapunzel does have several moments of agency in Tangled, and it’s through these that she claims the story for her own. Her desire to see the lanterns is what sparks the entire movie. She first chooses to leave the tower, forcing Flynn to act as her guide; she chooses to fight off the criminals and dangerous men in the Snuggly Duckling, who were, for all she knew, the exact men Gothel had warned her about; and most importantly, she figures out the truth of her identity on her own, and when she does, she confronts Gothel in a powerful scene:

Rapunzel: I’m the lost princess.
Gothel [sighs]: Please speak up, Rapunzel, you know how I hate the mumbling.
Rapunzel [louder]: I am the lost princess. Aren’t I? [Gothel looks stunned] Did I mumble, mother? Or should I even call you that?
Gothel: Oh, Rapunzel, do you even hear yourself? Why would you ask such a ridiculous question?
Rapunzel: It was you! It was all you!
Gothel: Everything I did was to protect you. [Rapunzel pushes her] Rapunzel!
Rapunzel [walking away]: I’ve spent my entire life hiding from people who would use me for my power—
Gothel: Rapunzel!
Rapunzel: —when I should have been hiding… from you!
[…]
Rapunzel: You were wrong about the world. And you were wrong about me. And I will never let you use my hair again!

Every one of these actions is very difficult, especially for a person as victimized and as brainwashed as Rapunzel. A person who has never faced these challenges might well watch the movie and think, “Finally, she’s growing a spine!” but in truth, it is very difficult to do what Rapunzel does in the movie. Facing off with Mother Gothel was her crowning moment of agency. Mental strength is so taken for granted in our society that people might not see this realization, this standing up for herself, as agency. But it is.

As an aside, because Flynn’s cutting of Rapunzel’s hair is often brought up as evidence for Flynn being the real “hero” of Tangled, I want to address it very briefly here: Flynn has his own character growth that has nothing to do with Rapunzel’s. He starts off the movie as a vain, shallow guy who longs for wealth and solitude, and yet at the end of the movie, he gives up everything he has—his very life—to selflessly help someone else. Flynn cutting off Rapunzel’s hair was the culmination of his storyline, not Rapunzel’s. (Then Rapunzel heals him using not her hair but a single tear, echoing the myth of how the magical flower sprouted from one drop of the sun, and brings us back to Rapunzel and her story.)

If there was one facet of emotional abuse that Disney didn’t cover, it would be Rapunzel’s recovery from the toxic environment in which she had lived for eighteen years, but as that really might have been too dark for a Disney movie, I think it’s fine that Tangled doesn’t go into it. As it is, Rapunzel does reach out to Gothel as Gothel is falling from the tower, and while that may have been Disney’s attempt at showing Rapunzel as the innocent, morally good character that they demand of all their protagonists, when viewed through the lens of Stockholm syndrome and emotional abuse, Rapunzel’s actions can easily be read as one more attempt by the victim to save the abuser despite all that Gothel had done to her. 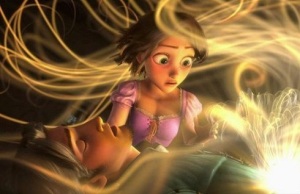 Perhaps having this theme in a children’s movie was a little dark, but Tangled teaches a valuable lesson that isn’t typically seen in children’s media, and it does so in a subtle, nuanced way that makes it easy, or as easy as this sort of thing can possibly get, for parents to have a conversation with their children about this sensitive topic. Other Disney movies cover themes such as the importance of hard work and the importance of being yourself. For some children, Tangled‘s theme might be equally as important.

For other people’s takes on Tangled and for some personal accounts of how this movie resonated with survivors of abuse, check out these links:

24 thoughts on “In Brightest Day: The Emotional Abuse of Tangled”