At its core, No Man’s Sky is a game about exploration and, yes, colonization to some extent. Hello Games gives their players essentially no guide on how to traverse the systems of planets surrounding them, and this becomes especially apparent when interacting with the few intelligent species you come across on the way. You can choose to ignore these fellow travelers entirely, putting your mark on everything by renaming landmarks and entire planets with seemingly no consequence outside of other players being able to see what you named it if they arrive there themselves. Or, you could simply button mash though the dialogue options you’re given during a conversation with one of the other races, and hope you choose the right answer (or just one that doesn’t spark some sort of galatic hostilities between you and that race). Yet doing either of these would mean that you’d miss out on one of the most compelling parts of the game. Every space traveler starts out knowing nothing about these other cultures, but with a little effort—and a little magic—No Man’s Sky gives a highly accurate analogy to what it’s like to learn and use another language. 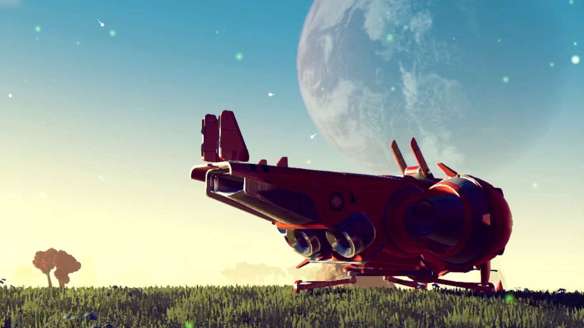 When playing another spacefaring game like, say, Mass Effect, it’s expected that most of the information about various planets and alien races will come through the codex, typically implying that the player’s character already knows these things. As for speaking, there’s usually some universally known language that most people use (see: Star Wars’s Basic), or if there is a language that isn’t immediately verbally translated into the player’s native tongue—via some sort of sci-fi tech—it’s visually translated immediately so the player doesn’t miss out on anything. Yet No Man’s Sky refuses this and embraces the opportunity for the player to actually miss out on something due to their cultural ignorance.

Unfortunately, due to how expansive Hello Games attempted to make No Man’s Sky, none of the aspects of the game ended up close to fleshed out, and the communication with other species is no exception. There is nothing ever stopping you from talking to one of the aliens–a helpful indicator under their names says what standing you hold within their culture, ranging from “friend” to “enemy”, but I’ve never seen these have an effect on anything myself. In being able to speak with these fellow space denizens whenever, though, it really does feel as though you’ve been plopped in the middle of a foreign country, looking quizzically at the figure who just asked you something because you have no idea what the fuck they just said, and only having a set of three answers to give you context clues by which to respond.

Hello Games does understand, however, that having repeated scenes of sitting down, “studying” a book, and learning could get rather dull. As such, I can only call adapting to language and culture in their universe some force of magic. Rather than doing what I just described, as they journey, the player’s space wanderer can run across small pillars scattered across the planets. Upon examining them, the player learns a word from one of the languages of the three species in the game. Sometimes you get lucky and learn something like the word for “friend” or “don’t”, other times you learn the word for “circumlocution” or “fragment” and end up squinting at the screen wondering when the hell this word will ever come in handy.

If scavenging for these singular language pillars isn’t your cup of tea, players can travel to monoliths which not only house three language pillars in the same place, but provide a small snippet of cultural information. Not quite like Star Wars’s holocrons, when approached these monoliths imbue the player immediately with visions of eras long past, broken and disjointed. However, visiting many allows the player to piece together what happened to the races, and what virtues are important to them; one species may be testing your mercy while another may be tempting you to give into the comforts of your past and forget your space journey entirely. These are the only methods of learning: no one from any of the other races—not even the ones that share a common tongue with you—will teach you words, or even anything about their culture.

What strikes me about this being particularly magical, however, is that these remnants of language almost feel like they’re set out to destroy some sort of “big bad”. No Man’s Sky gives you the option to do whatever you want, but you can also follow the mysterious Atlas and travel to the center of the universe (the main goal of the game). Atlas—an intangible force—comes off as an omnipotent being, and through the gathered histories via the monoliths, you begin to discover that Atlas may be responsible for the current disarray of the others. You may not be building up skills to overtake Atlas, but by gathering pieces of the various cultures and languages, and actually engaging the other races in conversation, you get a sense that you may be helping the universe stand up to Atlas, or at least survive through it. Viewing it like this, language in No Man’s Sky becomes less of a passive skill, and instead almost analogous to someone in Final Fantasy learning a new spell. (And being surrounded in a mystical purple light after learning each word doesn’t hurt either.)

Learning a language in real life may be somewhat more forgiving than it is in No Man’s Sky: typically if native speakers from the language you’re learning see you trying, but struggling, they lend a hand, not to mention resources on these topics are bountiful. Despite this, No Man’s Sky manages to capture the feeling of learning, and the tension that goes with it. Sometimes, yes, you’re going to end up remembering some random-ass word that will only have one specific application while floundering around for the word for “exit”. There will also be times where you pick out one or two words from a sentence and you can glean what the intent may be, but not with enough confidence to respond in any certain way. However, through perseverance and hard work, there will come a point where you can understand most of what is being said. And in that moment, there is no prouder feeling. Perhaps No Man’s Sky didn’t achieve all that it wanted with its ambitious premise, but what it did do was manage to capture the magical feeling of learning and interacting in another language, and in my eyes—admittedly the eyes of a language lover—that experience is entirely worthwhile.

2 thoughts on “Magical Mondays: Linguistics in No Man’s Sky”