So this might come as a shock, but I only just recently watched Star Wars Rebels and didn’t follow the show at all until this month. I really wanted to get into it earlier, but I just didn’t have the time. However, I certainly made time after spoilers for the Season 1 finale ended up on my Tumblr dashboard. Before this, I had been spending my days adamantly avoiding any kind of spoilers—or at least trying to—to the point that I haven’t even read any reviews for the show. It wasn’t until the new pictures of Ahsoka Tano starting filling up my Tumblr page that I decided to find out what was going on.

Spoilers for Star Wars Rebels below.

I am happy to say that Rebels lives up to just about all the expectations I had for it. Every single one. Hell, the show even finds time to go into the Twi’lek slavery issue during its thirteen episode run, and I will certainly love talking about Hera’s character and role during that episode more in depth in a different review. But for now, the big news regarding the series is Ahsoka Tano’s reveal as the mysterious Fulcrum, Hera’s secretive contact among the rebels.

Ahsoka Tano has, unsurprisingly, become one of the more beloved characters of the Star Wars universe, if not the beloved character during The Clone Wars. So it comes as no surprise to me that people would feel very passionate about any kind of change in her character design. Rebels takes place fifteen years after The Clone Wars, when Ahsoka is an adult. So naturally, as a grown Togruta, her lekku—head tails—and her montrals—horn-like protrusions—are longer, thicker, and taller, which we all expected. What we hadn’t expected was the change in her markings. And this change in aesthetics seems to be the biggest grievance fans have had with her introduction. This more than likely would never have been an issue had The Clone Wars not shown us a future vision of Ahsoka during the “Mortis” episodes. We all thought we knew what an adult Ahsoka would look like, because we saw an adult Ahsoka during the third season. And the Ahsoka in Rebels looks nothing like her.

In the two pictures above, you can clearly see the difference in her character design. And I love that Star Wars did this. To start off, both shows, while very similar in aesthetics, do have different art styles, which accounts for her slight change in eye and skin color. But that wouldn’t explain how her stripes ended up being so different.

I think it’s important to remember, though, that the first picture is a vision and not real. Ahsoka was imagining what she would look like when she was older, and who we think we will be is not often who we actually become. Unlike other Togruta, Ahsoka didn’t grow up around her own people. While she certainly has ties to them and feels passionately about the culture she comes from, she has had very little Togruta influence during her life. The Togruta she probably sees the most during her childhood is Shaak Ti. And in Ahsoka’s vision, she probably imagined her future self as the way she sees Shaak Ti. 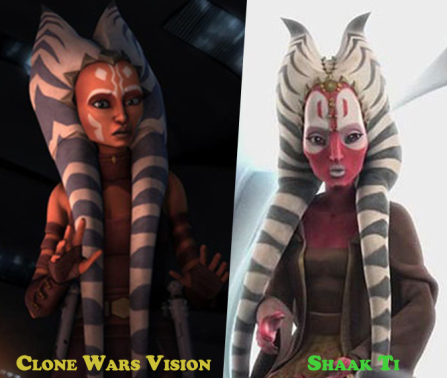 The two of them look eerily similar, considering that they aren’t related—and those similarities cannot be explained because they are both Togruta. We see plenty of other Togruta throughout The Clone Wars, and they all look completely different, from their markings, to the length of their lekku, to the shape of their montrals.

It’s also possible that Ahsoka’s creators changed her design to reflect Ahsoka’s new role in the story. In The Clone Wars, Ahsoka is a skilled Padawan learner, but she’s still growing and looks up to both Anakin and Obi-Wan for guidance. In Rebels, she’s now the person other people are looking to—she’s in charge, and she’s the one making decisions for everybody else. This role change will allow us to see Ahsoka go places she couldn’t before.

The one criticism the new Ahsoka has faced that I really want to talk about is that she’s been whitewashed. I haven’t seen too many people mentioning this, just a few here and there. And initially I thought the whitewashing criticism was just people being unreceptive to her appearance and looking for something to complain about—after all, how do you whitewash an alien?

Well, there is a problem with representation when it comes to futuristic sci-fi stories. Most of the humans we meet, who are the characters most of us will relate to ethnically, are all white. For people of color, this leaves all of Mace Windu and Lando—two characters who don’t have very big roles. Using alien species as a stand-in for diverse representation is a cheap cop out on any writer’s part. Those species aren’t real—but we still use them to represent non-existent people over actual people. And you might notice that most of those alien species, or at least most of the ones that matter, just end up with white features anyway. This is a huge problem. I also do think that Ahsoka was written as a Togruta and not as a human specifically. Since she’s not human, we can all see ourselves in her and relate to her however we want to. But Ahsoka Tano is still an alien with orange skin, lekku and montrals, and non-human markings, so can she still be whitewashed?

Ahsoka can be whitewashed, and in a non-physical sense too. Right now, the issue seems to have more to do with her facial features—which, due to the new art style, have changed—than it does her new role in the story. Though many alien species end up with white features, that was not true of Ahsoka during The Clone Wars. Her character has some distinctive facial features, such as the shape of her lips and nose, that are not typical of white people. And sadly, those features have changed in Rebels to look whiter.

Furthermore, Ahsoka herself is a minority character—there are not a lot of Togruta in the Order, let alone on Coruscant. And though we don’t see this too often in The Clone Wars or at all in the movies, racism is alive and well in the Star Wars universe—Twi’lek slavery comes to mind—and the one species that has the most privilege seems to be humans, who are all mostly white. Furthermore, the Togruta and the Twi’lek species are more closely related to each other than other species. Twi’leks are probably some of these most oppressed people in this galaxy. And the Togruta, when we see them, are completely victimized. So yes, there are a lot of minority issues surrounding Ahsoka’s character, and any kind of erasure of those issues could definitely be seen as whitewashing.

In some ways, Rebels already has removed some of Ahsoka’s Togruta culture in her new design. Rebels Ahsoka wears a different headdress from The Clone Wars Ahsoka. In The Clone Wars, Ahsoka wore an Akul-tooth headdress, which she has now replaced with something else. We don’t actually learn about the significance of an Akul-tooth headdress during The Clone Wars, which is a shame, but since it can only be worn by a Togruta that has slain an akul, it likely would have had cultural, and maybe even religious, value to Ahsoka. Being able to wear it would be considered an honor. At some point in the future, it would be nice if Rebels addressed why Ahsoka made this change.

There is still a part of me that thinks this whole whitewashing complaint is a bit stretching, but that might also be because I am white. Just because I can’t see a problem or relate to it doesn’t mean that problem doesn’t exist. If there is something about Ahsoka’s new design that is causing people of color to have a harder time relating to her than they did in The Clone Wars, that’s going to be a serious issue for Rebels.

At this point, we’ve only seen Ahsoka in Rebels for all of two minutes, so whether or not the show will do a good job handling her character has yet to be seen. Judging by how well Rebels does with Hera and how well The Clone Wars did with its characters, I am more than willing to give Rebels the benefit of the doubt.