So, you all knew it was coming sooner or later: my review of Avengers: Age of Ultron. I have already seen the movie twice, but unlike its predecessor, I probably won’t hit the thirteen-showings mark with Avengers 2. Even though I enjoyed parts of it, it was weaker than the original Avengers on almost every level.

Hella spoilers after the jump.

The basic plot of Age of Ultron is this: after retrieving Loki’s scepter from Hydra, the Avengers think they’ll finally be able to chill. Unfortunately, Tony picks up an electronic signal from the scepter and thinks it would be cool to use its thought patterns as the basis for an AI. And not just any AI, but the robotic global defense system he and Bruce have been sketching out (without the knowledge of the rest of the team). Obviously, this goes dramatically wrong, and the Ultron program achieves sentience on its own, and decides, as protective robots so often do, that the best way to protect humanity is to destroy it.

On his side for most of the movie are the Maximoff twins, Wanda and Pietro, who hate Tony Stark (and therefore anyone affiliated with him) so much that they volunteered to let Hydra experiment on them just so they could possibly get powers and possibly get the chance to kick his ass. They help Ultron steal some vibranium from a black market arms dealer, and Ultron brainwashes cool new character 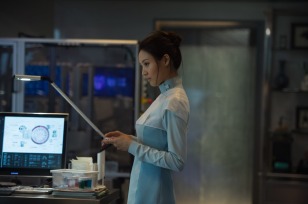 Dr. Helen Cho into using her super-fancy medical tissue printer to print him a physical vibranium-and-tissue body that he can upload himself into. This is where it starts going wrong for Ultron—now that he’s got a brain, Wanda can read his thoughts, and she realizes that he wants to basically kick off an extinction event. That’s not what she and Pietro signed up for, and she immediately defects to the Avengers’ side. Unfortunately, Ultron’s plan is already in motion: he has created an engine that will lift the small (and fictional) Eastern European city-state of Sokovia so far into the atmosphere that when it drops, it’ll be Chicxulub all over again. The Avengers, now up a few members, have to not only defeat Ultron and all his component pieces, they must also save the people of Sokovia and figure out how to break the city-cum-meteor into small enough pieces that it won’t hit the Earth and send the whole human race the way of the dinosaurs.

In and of itself, that shouldn’t have been a bad movie, but you wouldn’t believe how many things could go wrong there.

There were so many deus ex machinae in the story—from Dr. Cho’s person printer to the magical internet hub that Tony rescues JARVIS from to the random Water of Sight that Thor goes swimming in to re-access the bad dream Wanda whammied him with. (Seriously, is Chris Hemsworth contractually obligated to be shirtless and wet in every movie? Not that I’m complaining, but…) You shouldn’t need that much weird explanatory shit to make your plot work.

And the characterization was weird as fuck. For one thing, Joss seems stuck on Innocent Republican Grandpa Steve Rogers, which is such a weird oversimplification of his character. The running team joke throughout the movie is that Steve scolded Tony for swearing in the first fight of the film. This guy was a soldier in World War II, Joss, I think he’s probably heard (and said) a curse word or two before.

And of course the big WTF of the movie was Natasha. What the serious fuck. She spent the entire first half of the movie making the most stereotypical calf eyes at Bruce and just… inexplicably throwing herself at him with no exposition for why they’d suddenly gotten so close. There’s a scene where Bruce literally faceplants into her boobs in a move straight out of the shittiest sort of harem anime. And then she spends part of the second half damseled. She’s kidnapped by Ultron and has to be saved by Bruce. And don’t get me started on her equating not being able to bear children with turning into a literal green rage monster that has leveled towns. There’s a whole post waiting to be written right there.

If you ignore Scarlet Witch and Quicksilver’s entire comics history, their arcs in this were believable, but I still think there had to have been a better fucking way to get them on Hydra’s side that wasn’t “volunteering because they hate Tony Stark”. Any kind of mind control would have been a better plot device, or substituting a different, non-Hydra evil organization. Seriously, at least have the historically Jewish characters volunteer to be experimented on by an organization that isn’t fucking Nazis???? Quicksilver also apparently died in this movie, but his contract length with Marvel is still unclear, so he may not actually be dead.

It made me kind of uncomfortable that so much of the really violent destructive fighting happened in mostly POC countries. At least in the first Avengers they destroyed NYC while fighting off an external threat. I don’t think there’s any way even the best PR person could spin “the Avengers created an AI that went rogue and when they tried to stop it they destroyed a bunch of Seoul and most of a Generic African Coastal City ™ in the meantime and had to explode a small Eastern European city-state in the upper atmosphere to keep said rogue AI from dropping said city-state into the Earth and causing a mass extinction event” in a way that makes the Avengers sound like the good guys. Just saying.

There was plenty I liked, of course. I thought Vision was cool as a character, and I look forward to seeing him in future stuff. I also thought Dr. Cho was awesome, and I hope this isn’t her last appearance in the MCU. The Avengers lack a dedicated medical specialist right now, since the movies made Jane Foster an astrophysicist, and I’d much rather see an intelligent lady of color step into the role than Benestephen Strangebatch. I also really loved watching Cap and Thor team up to fight using the shield and Mjolnir’s combined powers—they kept playing off each other in a way that suggested they’d been training together since their first fight in the woods in the first Avengers.

I dunno if this is an unpopular opinion or not, but I was really amused by Clint having a secret family, if only because I now headcanon him as the daddest dad to ever make a terrible dad joke. I was never a huge Clintasha shipper, and so I actually loved how their platonic friendship was played. And honestly, I would have been okay with Natbruce if it hadn’t been thrown at us. It was also cool getting some Natasha backstory—although what we did get just proved that they totally could have made a Black Widow movie.

Finally, I am excited for the future of the Avengers. In adding another woman and two Black guys to the team, the majority demographic will no longer be white guys named Chris. And I’m especially excited for Rhodey and Sam going forward.

In the end, it wasn’t an unlikeable movie—I definitely had a good time watching it—but it didn’t have the fun factor of the first Avengers, or the nuance of The Winter Soldier. I’d say it’s definitely worth watching once or twice, but it’s by no means gonna get the number of theater trips out of me that the first Avengers did.

19 thoughts on “Was Avengers: Age of Ultron as Good as Its Predecessor?”