Xavin has quite possibly become one of my favorite characters ever. She appears in the Runaway comics, as the character Karolina’s betrothed. As a Super-Skrull in training—well, as a Skrull—she can shapeshift. During her initial appearance when she approaches Karolina to tell her about the arranged marriage, Xavin first takes the form of a human male, thinking that will be appeasing to Karolina; however, after Karolina hesitantly admits that “[she] like[s] girls”—much to the shock of her friends—Xavin thinks nothing of transforming into a young woman.

Xavin completes this transformation while stating:

Karolina, Skrulls are shapeshifters. For us, changing our gender is no different than changing hair color.

Xavin’s character has quite understandably raised some very significant questions when it comes to gender identity, and Xavin has a habit of switching between male and female forms depending on what situation she finds herself in. Notably, in Karolina’s presence, unless needed otherwise, she does choose to be a woman.

Not being nearly as knowledgeable about the Skrulls as Lady Geek Girl, I found myself asking her what I consider to be a very important question: do the Skrulls have to shift into something that has a gender, or can they be genderless?

She could not answer this, because the Marvel Universe doesn’t really explain how their shape-shifting abilities work. Furthermore, in a society where changing gender “is no different than changing hair color”, I could only wonder how the Skrulls would view gender and sexuality. One of the ways this issue was presented to me was in these questions:

If you could change your gender at will, lived most of your days as a woman, and then married a man, how would you feel if your husband turned around one day and proclaimed that he was gay? Would you be willing to shift into a man in order to appease your husband? Would changing after living as a woman for so long bother you?

I can only assume that individual Skrulls favor being either male or female, since they always seem to have a gender at any given time. Maybe some of them do prefer being male, while others prefer being female, but I would hazard a guess that that would be for only aesthetic purposes. In a society where gender is so fluid, I find it hard to believe that they would view it the same way as we do, which is one of the reasons why I know Lady Geek Girl disagrees that the volume Dead End Kids tries to clarify that the real Xavin is a woman, and to be honest, I find myself disagreeing with Dead End Kids right along with her.

I should also clarify that the only reason I refer to Xavin as female is because she tends to take on a female form when in Karolina’s presence. I have no problems calling her a man, but I feel that neither gender truly fits her character. Xavin is only a she in my head some of the time. She is only a she in this article all of the time because that makes this less confusing. But I digress.

Whenever Xavin feels angry, she tends to revert back to her true form. In Dead End Kids, she and Karolina end up in a fight, and Xavin morphs back into being a woman. She quotes:

I simply wasn’t concentrating… maintaining a false shape does take a measure of effort.

To this, Molly exclaims:

Dumbo, you girled out! That makes this the real you, right?

I didn’t realize that was in doubt.

She and Karolina then proceed to kiss.

I can only reiterate that Xavin should not have the same views on gender as we do. When she first arrives, she is very much male and refers to herself as someone’s son, but this is because she is in a male form, which for a shapeshifter is a false form. The same goes with being female. Does she have to be one or the other? I don’t know, but regardless, she probably wouldn’t have turned into this upon losing her concentration: 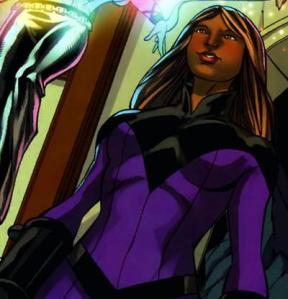 She probably would have become this: 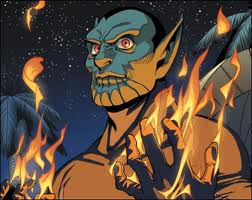 In many regards, the Skrull are similar to the angels from Supernatural when it comes to gender and sexuality, both in how they should be and in how they are presented. Gender should have no meaning to the Skrull, because given their species, they should all be gender fluid, and because of that, all their sexualities should have very little to do with gender.

Maybe it’s possible that there are Skrull out there who are only attracted to male or female forms and not both, but for a shapeshifting race, something like this may only pertain to sex. Their partners are not always going to remain the gender they like, because that would be denying them a natural ability. Even Xavin refuses to remain a woman at all times, despite Karolina’s dislike of her male form. How the Skrull look means nothing to them on a day to day basis, and what gender they need to be for intercourse probably doesn’t faze them too much.

At one point, Xavin turns into Karolina’s friend Nico, because Xavin knows that Nico is appealing to Karolina. All this tells me is that Skrulls are more or less indifferent to physical aspects. And while I overall like Xavin’s character and the questions she and her race have raised about gender and gender identity, like the angels of Supernatural, I wish they were written less from our perspective of gender and gender identity.