Usually I’m an easygoing person, but one thing that gets under my skin is “kitchen jokes”. Partly because someone actually thinks they’re being clever, and in my opinion, they’re ironic. As a woman who has been working in food service for seven years now, I’m not blind to “men only” kitchens in restaurants. The general reason for this seems to be “because women can’t handle the pressure and the workload”. I know that that excuse is complete malarkey, but I don’t understand why it seems to be a continuing trend, especially in the media. Women are portrayed as home cooks, and not as professional chefs. On television there are many examples of serious female chefs. There’s Cat Cora, who’s still the only female Iron Chef in America. Julia Child, one of the first chefs ever televised in America, is famous for her influence in culinary arts. If we have women on TV who can be professional chefs, why can’t this be more common in fictional mediums?

Cooking Mama gets borderline insulting as it is….. 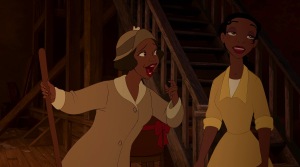 I’d roll my eyes too…

In Disney’s The Princess and The Frog, Tiana’s dream is to own a restaurant of her own and to cook her family’s recipes for everyone to enjoy. In the beginning of the movie, they show Tiana working two jobs, saving money to buy an old sugar mill. She even turns down a night on the town with her friends because she’s so dedicated to creating her restaurant. When she buys the building, her mother stops by with their old stockpot as a gift. They walk inside and Tiana starts talking about how she’s so close to making her dream a reality, when her mother tries to tell her about other things she could be doing with her life. She mentions how Tiana should go out and “find the man of her dreams”, and how she wants grandchildren soon. Though it was done in a lighthearted nature, I couldn’t believe her mother, knowing the restaurant was Tiana’s dream (and her late husband’s), still tried to tell her to settle down and have a family instead. Even when the film kept pushing the idea that working too hard can be just as bad as not working at all, I was taken aback by what her mother had to say to her. What is so wrong with being passionate about your dreams? It’s one thing to be a workaholic, and another to have goals and aspirations. It takes a lot of money to buy a building, let alone renovate one; she would need to give a lot of her time and dedication to achieve her goal. Why is she being asked to go date people instead of pursuing a career?

Spirited Away, by Studio Ghibli, also follows the idea that only men work in the kitchen. Admittedly you don’t get to see much of what’s going on “in the back of the house”, though everyone seems to have a specific job. Much of the plot follows Chihiro, a young girl who gets whisked away to the spirit world to work at a bath house. She, along with other women in similar garb, have the task of cleaning and maintaining the bathhouse. There are women in robes meant to be hostesses to their customers, and finally there are the frog creatures. Their roles range from being the bathhouse manager, helping to clean the baths, and finally cooking. They (along with the women in robes) seem to be a race of a single gender. The frogs are all male, and the hostesses are all female. Is there a particular reason the frogs are solely responsible for preparing the food? Not much is ever explained about the different races and spirits in the film, but it’s clear that maintenance work is rotated between workers, so why not kitchen duties as well?

Why is Linguine twisted like that? Colette pinned down his sleeve to the cutting board… with three knives…

Ratatouille, by Disney/Pixar, is about a rat who becomes a chef with the help of a garbage boy, Linguine, who he uses as a marionette of sorts. What I really wanted to see, though, was more of Colette, a chef from the restaurant Gusteau’s. The fact that there was only one woman in a 4 star restaurant didn’t shock me; what surprised me was the fueled rant she gives. Her first few words to Linguine were about how the kitchen is maintained by rules from old men, designed to keep women out. The only reason she’s still there was because she was the toughest chef in the kitchen. She continues to say she has no intention of losing her job because she has to train an idiot who got lucky and started cooking without having any experience. The movie openly presented this conflict and that made me excited to see the rest, yet nothing ever really came of the issue. Later Colette becomes the romantic interest for Linguine, and she starts to respect him as he genuinely appreciates her input and advice. It’s great that she isn’t being ridiculed for being a woman, but I’d love to see recognition for her skills because she’s good at her trade, rather than “because we’re dating, I don’t want to upset her”. When the movie keeps pushing the idea that “anyone can cook”, and they even touch on the fact that women are being held back from a professional cooking career, why don’t they pursue the idea any further than that?

There’s a part of me that doesn’t believe the directors and writers made these decisions on purpose (except in Ratatouille), yet the impact is still there. It may seem like such a small detail, but to me, showing successful professional female chefs is another step towards equality. Rather than placing people in certain societal roles based on gender, people should be able to live and be portrayed in different areas that fit their personalities. If I have to listen to these terrible jokes, can I at least have a better portrayal of how women can cook? Either for themselves, for commercial businesses, or as a career.

7 thoughts on “Sexualized Saturdays: Female Chefs in the Media”