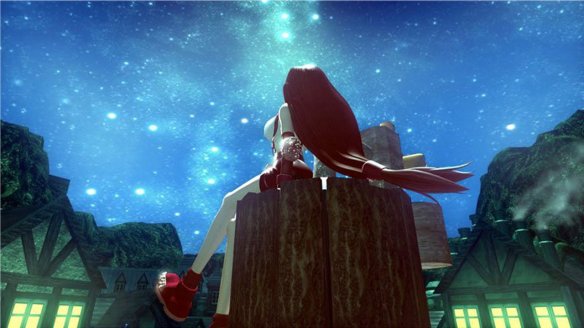 A game certainly would have a hard time becoming as popular as Final Fantasy VII if it didn’t have some decent characters. On the whole, I think the game did a really good job with its characterization—but like just about all video games, it is not excused from sexism. Unfortunately, when it comes to VII, the sexism seems almost worse than it is in the other games because of how much more successful this one became.

Tifa and Aerith are the two most prominent female characters. In some ways, however, that’s not because of their personalities, but more because of their relationship to Cloud. Both of them are relegated into a love triangle with him. Fortunately, this does not cause any catfights or petty backstabbing. However, that’s all the more I can positively say about it. Not so positively, both of their motivations and their reasons for existing in VII are there to further Cloud’s storyline, when Tifa and Aerith could have been well-written characters otherwise. Much like Barret still displaying some racist qualities despite otherwise being a really good character, the same can be said of Tifa, Aerith, and sexism.

When VII first came out, I was about nine or ten years old, and I idolized both Tifa and Aerith. In some ways, I still do. Aerith is my favorite character, and Tifa’s a close second. I also don’t think that there’s any harm in looking up to both of them, because despite the nature of this post, I think they have a lot of respectable traits.

To start off, Tifa doesn’t fall into the typical role that most women in the Final Fantasy universes have. She’s not a healer or a mage of any kind. She’s a martial artist, and she’s probably one of the strongest, if not most useful, characters to have your party. That said, she’s also a nurturing mother figure. Tifa doesn’t have any children of her own, but she takes care of Barret’s daughter, runs an orphanage in the sequel, and all in all, she just likes to help people. In some ways, Tifa turns the mothering stereotype on its head due to her fighting prowess. She doesn’t just want the people she loves to be safe; she’ll actively protect them by taking on the bad guys, and there’s not that many people who can fight someone like Tifa and come out on top. She can take on just about everyone, and I can certainly respect a female character that is nurturing and physically active in her role.

Additionally, Aerith also has a lot of positive traits. Unlike Tifa, Aerith falls into a role more typical of girls. She likes to wear pink and she’s a little boy-crazy, which can be realistic in its own way. However, she dresses very conservatively, meaning she’s not there to be eye candy. In the very end, she’s the one who saves the world, and she’s also very self-sacrificing. She runs off to the City of the Ancients by herself, while having to be well aware of the danger, and though that eventually results in her murder, she was still willing to risk herself to save others, which is something I can also respect about her. 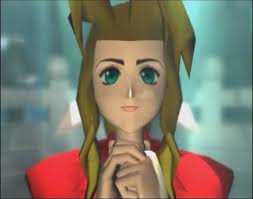 All that said, there are some significant problems with both these characters. As I mentioned earlier, both are relegated to being in a love triangle with Cloud. And their roles in the story tend to be dependent upon him and what his characterization needs.

Even Aerith’s death happens as a motivator for Cloud to fight Sephiroth. When they first meet, Aerith needs Cloud to save her from being kidnapped, and she promises to pay him with a date. One of the problems with Aerith is that she constantly needs to be saved. She is a character designed to be protected, and other than her limit breaks, she’s not that good of a character to keep in your party. The battle system is a little biased toward a physical strategy, rather than a magical one, or even a balance between the two. Aerith is physically weaker than the other characters, making her less useful.

Early on in the game, the Shinra Company manages to kidnap her for breeding purposes. We are at one point treated to what might potentially be taken as an attempted rape scene. Nanaki only pretends to violence to trick Shinra, but Aerith doesn’t know that he is not actually going to attack her at the time. As an aside, Nanaki’s also a dog thing. 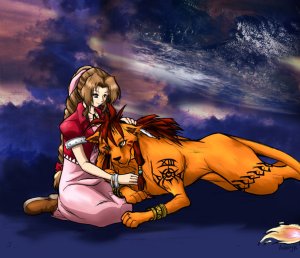 Clearly, they are genetically compatible with each other.
Art by XINVADER-GIFT-ART

Aerith’s boy-craziness also goes a bit too far. Offering to pay Cloud with a date for saving her is bad enough, but she likes him because he reminds her of Zack, her late boyfriend. She wants to be free to date whoever she chooses—which wouldn’t be a bad thing, by itself, but for the purposes of the game, her motivation is men. I can, however, give her props for also having a side motivation: she wants to learn about her people and her history. But her like of Cloud causes her to forgive him for some pretty terrible things. When Sephiroth possesses Cloud and attacks Aerith, she doesn’t seem to care that much or become afraid of Cloud at all. Maybe that’s the reason she goes to the City of the Ancients by herself, but in the conversation she has with Cloud about it, she doesn’t seem at all upset by what happened.

During the actual assault, I was under the impression that Cloud was also attempting to rape her due to something Cait Sith says. During the scene Cloud also physically forces himself on top of her after knocking her back. This makes her non-caring all the more baffling.

Tifa is not much better when it comes to Cloud. I have briefly talked about both her and Aerith before, but some of the points need restating. To start off, Tifa’s physical design is to titillate male audience members. It’s not as obvious as it is with characters like Lulu from X. Tifa will pose to show off her bosom, but her outfit doesn’t have to defy gravity in order to avoid a nip-slip. Her outfit is, however, still a problem. Tifa is very shy and less open about the boys she likes, which is another really annoying stereotype. But even without boys involved, she’s shy in general. She’s also very indecisive, and doesn’t know what to do when Cloud isn’t around. Much like Yuna’s outfit in X-2, Tifa’s clothing does not reflect her personality. Nor does it reflect her fighting style. A martial artist should not be in a mini skirt to begin with, let alone would that be an outfit someone with her personality would wear. This is thankfully improved upon in Advent Children. 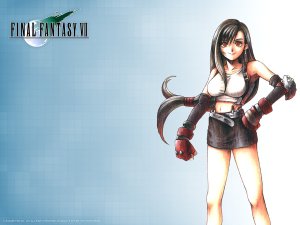 Her outfit is actually the result of a vote, because why would personalities dictate what women wear?

Due to Tifa’s nurturing personality, she exists to provide a crutch for Cloud. When Cloud falls into a coma, she leaves the party to stay with him and help him get better. After Sephiroth burns down her hometown, the story focuses more on how Cloud feels about the incident, meaning that Tifa only really cares for how Cloud feels as well. She does grieve over her father’s death and attacks Sephiroth in revenge, being brutally injured in the process, which then allows Cloud to carry her to safety. After that, her father never really comes up again.

Worst of all, however, is that fucking slap fight she gets into with Scarlet, an evil Shinra employee who wears a cocktail dress everywhere. I should remind everyone that Tifa can do this:

So the girl who can literally punch holes through armies, buildings, whatever is in her way, ends up in this situation:

And the other female characters are not that great either. The worst, though, is Shera. Shera is a non-playable minor character who works as a scientist in Rocket Town. Her goal in life is to help the character Cid with his life. She even admits that she lives for him. She’s so dedicated to him and his ideals that she willingly puts herself in situations where she’ll die so Cid’s dreams of flying a rocket in space can come true. Cid, like any sane person, cancels his plans and almost crashes the rocket to save her, since she was in the engine room at the time of takeoff and was about to be burned alive.

Because Cid now blames her for the failed takeoff, he spends his days emotionally and verbally abusing her, which she is completely accepting of, because after all, it’s her fault that Cid’s dreams didn’t come true. I cannot see any justification in Cid’s treatment of her. She literally devotes her life to him, because she has absolutely no motivations otherwise.