Geek culture really has a thing for nuns. Specifically, Christian (mostly Roman Catholic) women who have made vows to live in community with one another in order to pray and do good works while living a chaste, simple lifestyle. But geek culture doesn’t like nuns for the right reasons. Whenever nuns pop up in geek media, they almost always function as some kind of trope-filled plot device. They look more like the writer’s idea of what a nun is, and less like real nuns. If nuns were depicted accurately, they’d be a great source for feminist characters and plotlines.

The first and biggest problem with most nuns in geek culture is that they all fit a very narrow profile. With very few exceptions, they are all Roman Catholic and wear a black and white uniform (called a “habit”). They’re almost always white women with generic names like “Sister Mary” or simply “Mother”. Nuns are either evil, associated with demons and/or uncontrolable lust, or they’re an extreme version of the pure naive virgin girl trope. In anime, a nun is usually a miko, aka a Shinto shrine maiden. Those women get to be spirit mediums or shamans with cool powers or weapons. Not so much in Western geekdom.

Real nuns are way more diverse than that. Nuns exist in all kinds of Christian denominations, from Roman Catholicism to Eastern Orthodoxy to Protestantism (any Anglicans and Lutherans in the house?). Furthermore, they exist in non-Christian religions. Buddhism has nuns, some of whom are ordained, becoming teachers or other authorities. Taoists, Hindus, and Jains also have nuns. In all of these religions there’s a plurality of ways to be and act like a nun. Even if we just narrow our focus to Roman Catholic nuns (after all, those are the ones most commonly portrayed in geekdom), we’d still find a great diversity that’s not reflected in the slightest by our media. Nuns can live together in community away from the world, dedicated to a life of prayer (praying for the world, of course). But more often, nuns are religious sisters who are teachers, nurses, bookmakers, farmers, and other kinds of professionals. Nuns wear all habits in all kinds of colors and styles, from the full “Flying-Nun-Penguin-Suit” to a small broach attached to simple attire. 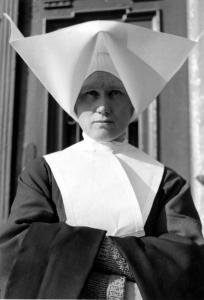 I wouldn’t be smiling either if this is what I wore every day.

Historically in Christianity, nuns were women who chose to live a life outside of society’s norms. Becoming a nun meant rejecting marriage, and a husband’s rule over one’s life. Sure, some women, particularly second or third daughters, didn’t have much choice in becoming a nun. But it was a source of freedom for many women, because they could live together with other women in a community as equals, with one women elected to be their leader. While a community of nuns still had to answer to the local bishop, the elected leader of the community (called a Mother Superior or Abbess) often had many of the same responsibilities as the bishop over her community. A priest might be given the task of saying Mass for the women and hearing their confessions, but he had no real authority over the day to day activities of the nuns. They lived a regimented schedule, with time set aside for work, prayer, play, and education. Even the most stereotypical groups of black-and-white nuns do so much more than demurely sit in a chapel and pray all day.

St. Hildegard of Bingen is a great example of a nun and an incredible feminist icon. Hildegard was given to a local Benedictine order of nuns at a young age, and when she was about forty years old she was unanimously elected the leader of her community. She was an accomplished writer, theologian, playwright, and botanist. She invented her own language and is the author of both the earliest surviving morality play and musical compositions intended specifically for female voices. Her theology was so renowned that she had a speaking tour around Europe. As the leader of her community, she wanted more independence for herself and her community, so she asked the local Abbot (male leader of the “brother” community) if she could move her sisters across the river. When he said no, she went over his head and got permission from the Archbishop, but the Abbot still refused. The story goes that at that moment, she became rooted to the spot, and when the Abbot himself couldn’t move her, he finally let her and her sisters have their monastery across the river. So if nuns are women who live together, pursue all kinds of interests, and reject some traditional kinds of male authority, why aren’t they used more often as feminist icons?

Nuns are evil and/or possessed by demons, or else are too naive to be of any other use than an errand girl. American Horror Story dedicated a whole season to evil nuns. In Orphan Black, Helena’s strange behavior seems to be mostly attributed to her harsh upbringing by some anonymous Ukrainian nuns. The episode “Mother’s Little Helper” of Supernatural’s ninth season gives us a flashback to Henry Winchester’s run-in with a community of demon-possessed nuns. Not all of the nuns are possessed by demons, but the ones who aren’t are too afraid to do anything but blindly obey the authorities and keep silent. Doctor Who gives us the Sisters of Plenitude, an order of feline nuns who care for the sick. At first they seem like a positive example of nuns (albeit with a sci-fi spin), but it is soon revealed that the nuns made their great advancements in medicine by experimenting on thousands of human clones. And in Monty Python and the Holy Grail, Sir Galahad the chaste is held hostage by the lusty nuns in Castle Anthrax.

Nuns take a vow of chastity, a vow to abstain from sex from the rest of their lives. Then why are they so often portrayed as sexually ravenous sirens? My theory is that real nuns are women who are unavailable to men, who have removed themselves from the pool by choice. And for some reason, we just can’t handle that idea. So we break their vow of chastity, and make nuns a delicious forbidden fruit. If nuns aren’t sexually available, they must be evil, so we get the evil nun trope. Then we combine the two for a sexy evil nun trope, our post-Puritan American culture’s worst nightmare.

So what can we do about it? Some content creators have gone the other direction in order to write feminist characters. The liberated woman is the former nun, like Mary Malone in His Dark Materials. This works on some levels, because while nuns don’t have to submit to the authority of a husband, Catholic nuns are still part of the greater Catholic Church, run by an all-male hierarchy of bishops and priests. Mary Malone is the enlightened scientist who left her Dark Ages religious mindset in the Dust. But we can do better than that. Authentic portrayals of nuns in geek culture, particularly non-Catholic nuns, would open up a world of storytelling and female characters that could pass the Bechdel test. The only man a Catholic nun’s life revolves around is Christ, and that wouldn’t even apply to non-Christian nuns.