END_OF_DOCUMENT_TOKEN_TO_BE_REPLACED

HBO continues to set a high bar in its primetime drama, and the new sci-fi drama Westworld is a strong addition to their lineup this fall. With cinematic production values that match or exceed Game of Thrones, there’s no doubt that the network has made a real commitment to this reboot of a relatively obscure 1973 movie, starring, of all people, Yul Brynner.

Please tell me nobody’s going to reboot this, too.

Westworld isn’t a sweeping epic, like Game of Thrones, but rather, a more thoughtful, existential work more in the mode of The Leftovers. It shares some common DNA with Orphan Black and Dollhouse, pushing through the boundaries of humanity in a world where technology is showing them to be soft.

Orphan Black‘s clones challenge a basic sense of human autonomy: Sarah and her sestras were made in a lab, from their carefully-coded DNA on out. They are copyrighted and patented intellectual property, reproducible by their owner. Their rebellion over the course of the series is, in part, about taking back self-ownership. Dollhouse was the converse: its featured technology did not create new bodies, but customized the minds and personalities of the individuals in its clutches. While the clones seek to reclaim their engineered bodies for their individual minds, the dolls of Dollhouse seek to regain ownership of their engineered minds.

Westworld, essentially, does both: its robotic characters have artificial minds in artificial bodies, beyond the fractured humanity of its predecessors. What self can there be under such circumstances? And how can the viewers navigate these uncanny representations of humanity?

Trigger warnings for rape and rape culture below, as well as spoilers.

END_OF_DOCUMENT_TOKEN_TO_BE_REPLACED

The 90’s was a weird time for animated children’s shows. Voice acting and animation standards were both painfully low, but because shoddy production didn’t cost much, it seems like if you could throw together a concept in under twenty seconds, network executives would give you a primetime spot. In 1995, Anthony and John Gentile, living as they did in this golden age of anything-goes production, presumably hit a massive blunt and then pitched something along the lines of “What if… Mad Max, except like throw in some Star Wars shit and like… there are dragons”. Out of this visionary dream came Dragon Flyz, a children’ show about a barren earth shattered by nuclear war, where a tiny group of survivors has built a floating city to escape the irradiated wreckage of what they call “Old Earth”. Also dragons exist now and you can ride them. How? Nuclear mutation. Don’t think about it too hard, okay, there are just dragons now and they understand English and it’s cool as hell. They eat lava.

END_OF_DOCUMENT_TOKEN_TO_BE_REPLACED

I just started watching Rick and Morty, and I must say that I adore it. Rick and Morty is the story of an elderly, eccentric, alcoholic scientist who moves in with his daughter and her family after years of being apart from them. Rick spends most of his time with his grandson Morty, who helps Rick out as they travel through space, alternate universes, and other crazy adventures.

So today we are going to talk about not only Rick Sanchez’s sexuality, but also what the sexuality and gender of a Hivemind would be like.

END_OF_DOCUMENT_TOKEN_TO_BE_REPLACED

Recently Saika and I started watching Sense8, the Wachowski siblings’ new Netflix offering. I’d been hearing great things about it in the news and on Tumblr—so far I’ve avoided spoilers about its more problematic parts, so please no spoilers—and I was pretty pumped to start it. Within the first few minutes of the first episode, though, I quickly figured out that, like Hannibal, this was not a show that I could go into blindly. I scoured the internet to see if anyone had put up lists of trigger warnings for Sense8, and I was thrilled when I found an entire Tumblr dedicated to helping out TV fans with triggers.

END_OF_DOCUMENT_TOKEN_TO_BE_REPLACED

I admit that I haven’t always been the biggest fan of Supergirl. It’s probably because the first Supergirl comic I ever read featured Superman putting his poor cousin in an orphanage and Supergirl barely ever got to fight any real bad guys. But as DC rebooted the character, over time she was given much more to do and was stereotyped significantly less. She remembers more about Krypton than Superman does and is even more powerful than him. I mean, the girl can even kick Darkseid’s ass. She is a great character. It amazes me that it took this long to finally get a Supergirl TV show. And I have to say, the new trailer gives me a lot of confidence that the show is going to be awesome.

END_OF_DOCUMENT_TOKEN_TO_BE_REPLACED

Alternate realities are one of my favorite things in speculative fiction and fanfiction, but they’re often poorly written. These types of stories are extremely interesting and explore different concepts within the main narrative without necessarily destroying the original canon storyline. The problem is that many of these alternate realities are poorly done and don’t follow any sort of logic. So while alternate realities can be really creative, they are also really easy to screw up.

END_OF_DOCUMENT_TOKEN_TO_BE_REPLACED 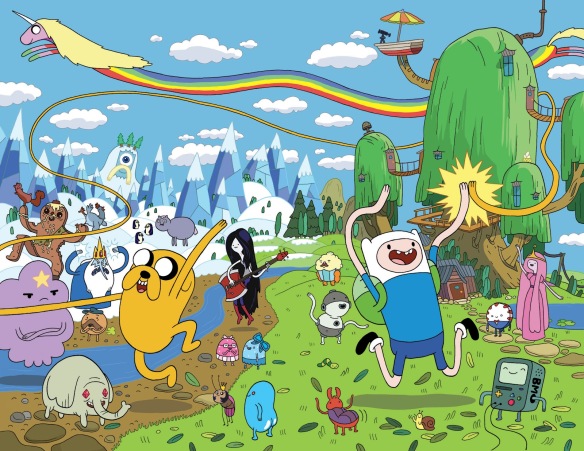 But recently the writers of Adventure Time have created more opportunities for us to see more human characters, which by extension gives the writers the potential to introduce more people of color.

Spoilers for recent episodes of Adventure Time below the cut.
END_OF_DOCUMENT_TOKEN_TO_BE_REPLACED